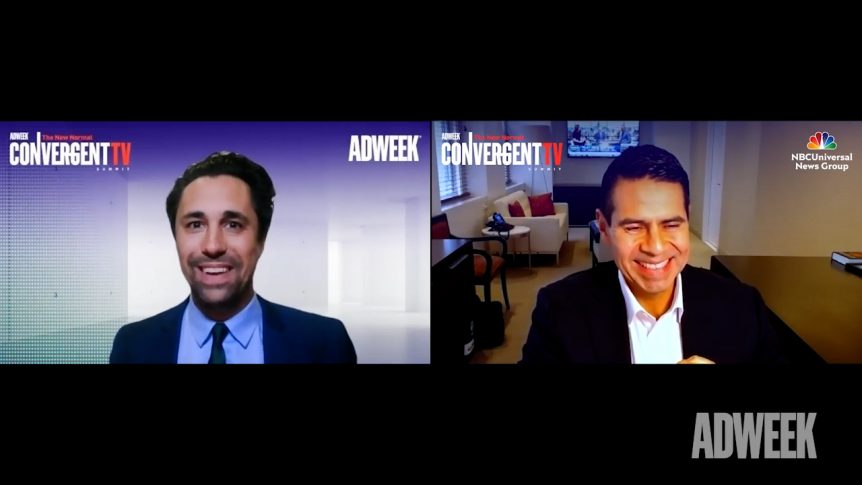 In his 17 months as NBCU News Group Chairman, Cesar Conde has centralized the operations of three distinct TV news operations, managed the build-out of several streaming news channels, and launched NBCU Academy, a multiplatform journalism training program. And he’s done it all while managing through the pandemic.

“It was an incredibly challenging time, as it was for everyone across many different organizations, and many different industries,” Conde told me at Adweek’s Covergent TV Summit Tuesday. “This was a newly-created role for us at NBCUniversal, and I came into this role at a unique moment in our country. We had a health crisis, which triggered an economic crisis, and then in turn we were facing social justice and social unrest in the country that we hadn’t seen in a very long time. All of those things that were happening in the context of a very important and a very historic election cycle. It made for an interesting start to the new role.”

Conde heaped praise on all journalists. “You can’t think of a more critical moment, at least in our in our generation, where the work that journalists are doing is having more of an impact, because of what’s happening in the world around us is having a unique impact on us as individuals, but also us as communities, as well as a country. It has been a great privilege to work with an incredible group of professionals and journalists at this moment in time.”

Conde, who joined NBC News Group from NBC’s Spanish-language network Telemundo in May, 2020, says his focus is now on streaming.

“We’ve been watching very closely the changing consumption habits and changing consumption patterns of our audiences across all genres, and particularly around news,” said Conde. “We’re very proud that we’ve been able to launch over the last 18-to-24 months a suite of streaming services that hit different audiences and offer a diversity of content.” Conde, who joined NBCU from Univision in 2013, says the core streaming offering, NBC News Now, has “tens of millions of viewers” on a monthly basis.

“This is our 24/7 streaming news, breaking news, general news service for our audiences, and it’s doing a lot of different things. But one of the things that’s been great is that it’s allowed us to tap in to a younger demographic. Half of our demographic on NBC News Now is under the age of 45,” Conde said.

“It takes an iconic brand, and iconic lifestyle offering, like Today show and puts it in an omni-channel ecosystem, and allows us to service that passionate audience base on a 24/7 basis,” said Conde.

Conde said early results for The Choice have been “pretty staggering,” adding, “It’s early innings, and people are beginning to create their consumption habits, so we’re excited that we’ve been early to it.”

The TV news business has always been competitive. CBS, ABC, CNN and Fox News are all immersed in the streaming arena, which is one of the reasons the NBCU News Group is doubling down.

“We’re clearly going to continue to make investments in our digital publishing business, and that’s been a home run for us,” he said. Conde said the company “hit a big milestone earlier this year” when the combined digital brands became the No. 1 digital news group in the country.

I also asked Conde about MSNBC’s most-watched host, Rachel Maddow, and what her future at the company looks like.

“What I can tell you is Rachel is an incredibly important member of our MSNBC and our extended NBCUniversal family, and so we are so excited that she’s going to be with us for many years to come,” Conde said. “I think what that’s going to mean is that you’re going to see more of Rachel in many more places than we’ve seen before, obviously including MSNBC.”