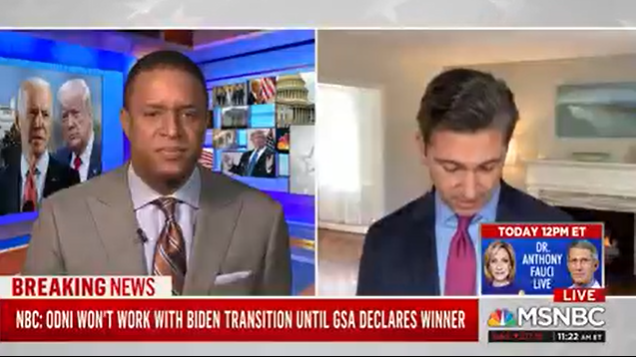 There seemed to be a bit of confusion today during Craig Melvin’s 11 a.m. hour on MSNBC that led to some expletives being thrown out there.

NBC News national security and intelligence correspondent Ken Dilanian was set to do a live hit on the program, but apparently was having some technical issues. Perhaps freaked out about the situation at hand, Dilanian threw in a couple expletives, which could be heard by the million+ tuning into the broadcast.

Thank you, Ken Dilanian, for this. MSNBC realness on display here. ❤️ pic.twitter.com/EkhGIUGelZ

Melvin returned to Dilanian about 20 minutes later, after they resolved technical difficulties, and the correspondent apologized for what transpired:

Melvin: We want to try to get back to NBC’s Ken Dilanian with breaking news. We were having technical difficulties a few moments ago. Ken has reporting on how the Trump administration is handling the transition with the Biden team, specifically with our intelligence community. Ken, what have you learned?

Dilanian: Hey, Craig. First, I want to sincerely apologize to viewers who may have heard me use profanity at the top of the last hit. What we’re learning today is the potential impact of the resistance of the trump administration to acknowledge the Biden win in the intelligence arena specifically.

At the end of the day, this isn’t a huge deal, and it’s not like scores of young people are watching cable news at 11 a.m. on a Tuesday. But still, let’s try to keep it somewhat clean on this medium, right?

So sorry for the profanity I used on air last hour. I was experiencing some technical difficulties and mistakenly hung up on the control room, though my mic still was on. Perils of playing producer, cameraman and tech support all at the same time from home. #2020 🙃