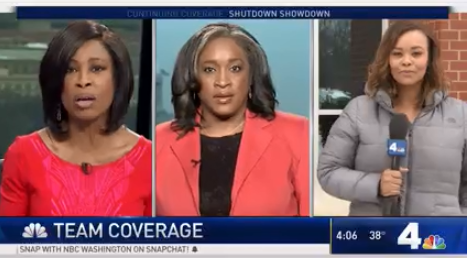 We’re on day 27 of the partial government shutdown, and daytime TV ratings for at least Washington D.C. station are through the roof.

According to TVSpy’s Stephanie Tsoflias Siegel, NBC Washington has seen a significant increase in A25-54 viewers watching the station’s mid-day programming —reflecting that more people are at home instead of at work—while fewer people are watching the station in the early mornings, when they would traditionally be getting ready for the workday, according to Nielsen data drawn from the first 17 days of January.

From the 4-4:30 a.m interval, WRC (NBC Washington) ratings are -29 percent in A25-54 viewers vs. the same time interval last year. The only other local station on at that time is WTTG, which is also down year-over-year.

“The routines of a lot of federal workers and government contractors have been affected, and that’s having an impact on our newscasts,” NBC Washington assistant news director Matt Glassman told Siegel.

Has this growth in daytime audience influenced what stories the station is covering? Glassman tells TVSpy, “yes.”

“Those who have been furloughed and are spending more time at home are watching more local news. We’re finding a lot of stories to tell about how the Shutdown impacts our community and the people who live and work here. They want and need information, and we’re tailoring our coverage to them rather than the politics of it,” said Glassman.