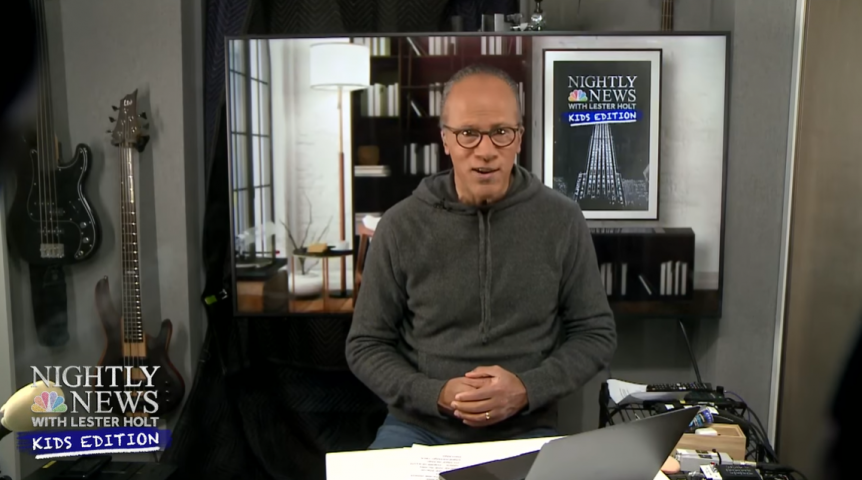 NBC News will be bringing its digital series, Nightly News With Lester Holt: Kids Edition, to NBC on Saturday, Oct. 31, and again on Nov. 14.

Both episodes will air Saturdays from 8:30-9 a.m. ET on most NBC stations. The NBC debut comes just day before the presidential election and on the morning of Halloween.

“I don’t have to wear a tie, which is always fun,” Holt told Variety in a recent interview.

Nightly News: Kids Edition (which includes a youngster doing a voice-over introduction) has been streaming once or twice a week on NBCNews.com since it launched in April. The show has also been available on NBC News’ YouTube channel and NBCU’s streaming service Peacock.

The test run on the broadcast network comes as interest in the news is high (at least among adults), though it remains to be seen if the 6- to 16-year-old age group, which is who the newscast is meant for, will leave their laptops and connected devices to watch the news at a specific time and on a TV set.

The 10-20-minute digital episodes of Nightly News:Kids Edition have mostly focused on answering questions about the pandemic. Holt has been joined by NBC chief medical correspondent Dr. John Torres for many of these shows.

However, according to Variety, on Saturday’s debut episode, Holt will talk to viewers about the voting process and feature reports on a virtual Halloween costume parade and a pumpkin science experiment. “He will also offer tips for children about masks, and a piece on pandemic puppies, and will take questions submitted by children on topics that fire up their curiosity.”

NBC isn’t the only network bringing youth-oriented news to linear television these days.

ViacomCBS is rebuilding Nickelodeon’s news division, recently naming 60 Minutes producer Magalie Laguerre-Wilkinson its vp of news programming. Laguerre-Wilkinson is set to executive produce the rebooted Nick News, the iconic youth-oriented newscast launched by Linda Ellerbee in 1990 and was shelved at the end of 2015.

CNN has partnered with fellow WarnerMedia franchise Seasme Workshop on a number of youth-oriented specials about the pandemic, co-hosted by Erica Hill and Dr. Sanjay Gupta. Sesame Street characters have joined the CNN newsers to help talk to younger viewers about the intense and sometimes difficult news surrounding the spreading pandemic.