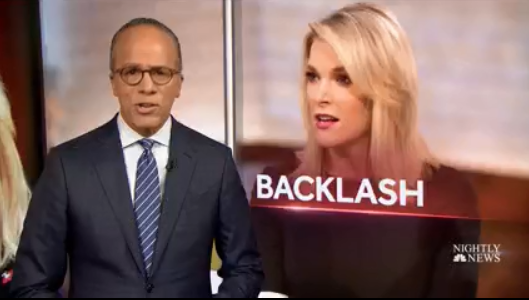 Another instance of a network newscast reporting on one of its own.

The NBC Nightly News with Lester Holt spent a minute and a half this evening covering Megyn Kelly‘s controversial comments, where she defended the idea of wearing blackface on Halloween.

NBC’s Megyn Kelly issued an apology to her staff after she defended the idea of wearing black face for Halloween. Her comments came after a panel discussion this morning, sparking a backlash over remarks many viewed as racially tone deaf.

Holt then went to NBC News correspondent Morgan Radford, who voiced the story. Radford, like Holt, is African American:

During a segment this morning about Halloween costumes, Megyn Kelly stirred controversy with her remarks about dressing up in black face.

The segment from this morning’s show where she makes the remarks was then shown:

What is racist? Because you do get in trouble if you are a white person who puts on blackface for Halloween, or a black person who puts on white face for Halloween. When I was a kid, that was okay as long as you were dressed up in a character… there was a controversy on The Real Housewives of New York with Luann, and she dressed up as Diana Ross, and she made her skin look dark darker.

After the segment, a number of tweets in response to Kelly’s comments were shown, with Radford saying that Kelly had apologized to her staff for using the term “black face.” Radford then voiced a portion of Kelly’s letter:

I realize now that such behavior is indeed wrong and I am sorry. The history of blackface in our culture is abhorrent, the wounds too deep. I’ve never been a ‘pc’ person, but we do need to be more sensitive in this day and age.