NEXT:Telemundo's Patsy Loris Says Her Team 'Has Prepared for Several Different Coverage Scenarios'
PREVIOUS:CNBC's Shep Smith: 'I’m Doing Great. I Feel Like I Have a New Lease on Life' 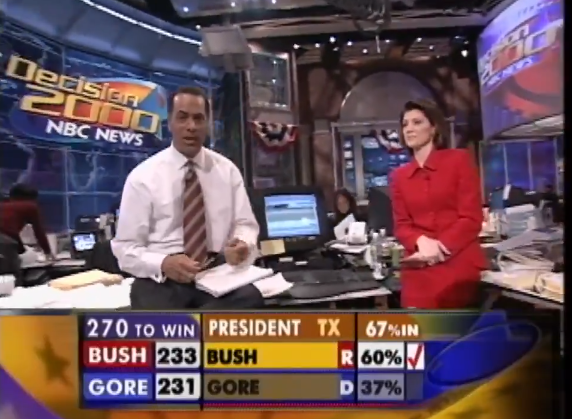 With only a single day until Election Day 2020, NBC Newsers took to Twitter to share some of their favorite past election moments, using the hashtag #MyElectionMoment.

Fast-forward 20 years, and these two newsers will be leading election night coverage on competing networks, Holt for NBC and O’Donnell for CBS News.

Seems like just yesterday we were covering the 2000 presidential election, right @NorahODonnell? #MyElectionMoment

See you all tomorrow for special coverage of #Election2020. pic.twitter.com/zFF3T1Nvqs

Andrea Mitchell shares her #MyElectionMoment, which was actually a convention moment. Mitchell is fending off balloons during a live hit at the 2008 Republican National Convention. Convention coverage co-anchors Tim Russert and Tom Brokaw refer to her as “Boom Boom Mitchell.”

#MyElectionMoment: drowning in balloons at the RNC in 2008!
In the anchor booth, Tom Brokaw and Tim Russert called me “Boom Boom Mitchell!” Memories!

See you tomorrow at 7pm on @NBCNews. pic.twitter.com/QURJ3uwHu3

Kelly O’Donnell shares a photo of her from 1996 covering the campaign of Republican presidential candidate Bob Dole.

On this Election Eve, looking back to my first campaign for ⁦@NBCNews…1996 traveling the trail with Bob Dole. ⁩ See you on @NBCNews tomorrow starting at 7pm. #MyElectionMoment pic.twitter.com/EVI94VIOIc

Katy Tur, who became a household name in media circles with her coverage of the first Trump campaign, shares a memory from Trump’s penultimate stop before Election Day 2016.

Flashback to NH on the eve of Election Day 2016 and Trump’s 2nd to last stop before ending the cycle in MI. A surreal ending to 510 days that started w a toss-away assignment to cover-what was considered-a ploy for publicity.

Jacob Soboroff remembers interviewing Trump during the 2016 campaign, and how the TV personality-turned-president shared his thoughts about The Rachel Maddow Show mid-conversation.

February 23, 2016 Donald Trump walked into a Nevada caucus location unannounced. I went up to him live on TV and the first thing he said was he liked @maddow‘s on-air charts. Election Nights are always unpredictable. Join us at @MSNBC and @NBCNews Tuesday night. #myelectionmoment pic.twitter.com/KdZoNVSMb1

Soboroff then shares the time he had to deal with an “f-bomb,” which is always a possibility when doing a live hit near groups of people.