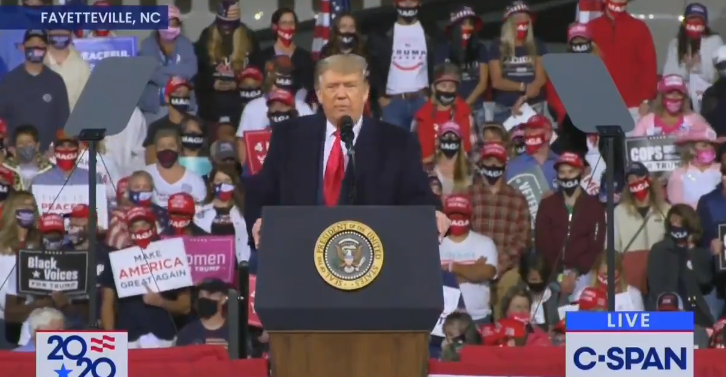 Over the summer, The Commission on Presidential Debates and the Trump and Biden campaigns agreed that the second presidential debate between the two candidates would take place Thursday, Oct. 15 in Miami.

Fast forward to the day prior, and it appears not only will the second CPD-sanctioned debate (a “town hall-style forum”) not take place on Oct. 15, but the candidates will now be participating in dueling town halls hosted by broadcast networks on that date.

How did it come to this? Early last week, the CPD proposed a virtual debate due to Trump’s Covid-19 diagnosis. Trump declined to participate. Then on Thursday, ABC News announced it would host a prime-time town hall featuring former Vice President Biden on Oct. 15 in Philadelphia.

Not to be outdone, NBC News announced today (Wednesday, Oct. 14) that it would host a prime-time town hall with President Trump on that exact same date, Oct. 15, at the Pérez Art Museum in Miami.

The candidates might not be going head-to-head, but it appears the networks are.

Both Guthrie and the president will be at least 12 feet apart from each other and the audience. The audience will also be socially distanced and required to wear face masks while on the premises, answer a symptoms questionnaire and take a temperature check prior to entering the outdoor venue. Every NBC News staffer will be tested on site in Miami.

According to NBC News, the event will take place in accordance with guidelines set forth by health officials and consistent with all government regulations.

NBC News says it has been given a statement by Dr. Clifford Lane, clinical director at the National Institutes of Health (NIH), indicating that he and Dr. Anthony Fauci have reviewed the president’s recent medical data, including a PCR test collected and analyzed by NIH on Tuesday, Oct. 13, and have concluded “with a high degree of confidence” that the president is “not shedding infectious virus.”

The decision to run this town hall on the same night as the Biden-ABC Town Hall is not sitting well with many.

From the former ABC News chief:

No mystery here. @realDonaldTrump town hall with @NBCNews is old fashioned counter-programming, intended to compete with and split the audience with @JoeBiden and @ABC … w inevitable critiques of “shows” and comparison of ratings.

From a former NBC News anchor:

Having dueling town halls is bad for democracy-voters should be able to watch both and I don’t think many will. This will be good for Trump because people like to watch his unpredictability. This is a bad decision. #vote

This is a bad result for American voters, who should not be forced to choose which to watch. So much is still going wrong with how TV journalism copes, or still fails to cope, with @realDonaldTrump. https://t.co/eRylzIuIBO

The decision by NBC News to run a Trump town hall directly opposite ABC’s Biden town hall is indefensible.

The point of a news organization is to serve the public. This is the opposite. @NBCNews could literally run this any other day, or any other time. Shameful. (Disclosure: I am a former NBC News exec) https://t.co/I1CrBq3Y3H

So, @NBCNews is presenting a Trump town hall opposite a Biden town hall? Do I have that right? They are forcing audiences to choose which candidate to watch? Isn’t that serving Trump’s agenda? Couldn’t they have chosen a different time?

A response to that:

From the former founding editor-in-chief of MSNBC.com:

Management at @NBCNews needs to explain ASAP how agreeing at last minute to add a town hall with President Trump opposite an @abcnews Joe Biden Town Hall is in the public interest. Even doing it at 10 ET just after Biden would have been a better decision. https://t.co/TN8oVVODGh

The cynicism of NBC execs, who gave us The Apprentice and thus this President, is stunning and shameful. ABC should call their bluff and move Biden so he talks after Trump. https://t.co/XSItenQNaz

Perhaps the harshest of messages came from someone who spent 37 years at the network.