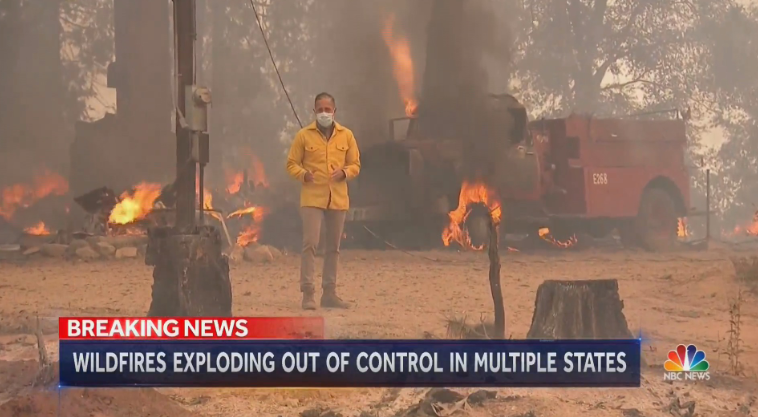 NBC News national correspondent Miguel Almaguer has covered his fair share of natural disasters over the years, but the West Coast wildfires he is witnessing from the ground right now are on an entirely different level.

“I’ve never seen anything like this before in my career,” Almaguer told TVNewser. “From some of our frontline reporting we have seen how these fires are burning hotter, faster and more explosive than ever before. The dramatic change in the environment, attributed to climate change, is seen in just how intense these wildfires burn and grow in size. I’ve also never seen such a smothering haze of toxic smoke in the air.”

Almaguer started his reporting for NBC Nightly News in Southern California and continued up the West Coast. He’s now in Southern Oregon.

“The layer of smoke never dissipated, turning the air quality into the most polluted in the world in several major cities,” he said.

We caught up with the NBC Newser to understand the state of affairs in the Pacific Northwest, and why people living in other parts of the country should care about this tragedy.

Where are you reporting from today? Describe the scene there, if you can.

Almaguer: Today, I am reporting from Phoenix, Ore. Yesterday, I reported from several small communities surrounding Medford, Ore. The destruction there is apocalyptic—entire neighborhoods wiped out by a wall of fire and now nothing is left standing but mangled metal and mountains of burned debris. It’s hard to fathom families used to call these neighborhood homes. The air quality is atrocious across the region with all of it coming to light under an ominous orange sky and a haze of choking smoke. Even if you were not directly impacted by the fire, you were likely suffering from its impacts today.

Talk about how Covid-19 has changed your reporting process.

Covid-19 has dramatically impacted many facets of getting to and covering stories. Flying is a second option, not a first anymore, and walking in and out of hotels is a bit surreal as we are always mindful of what we are touching and how we can keep ourselves safe. We also interact differently with each other, including wearing masks inside the same vehicle, being as separate and as far as we can and speaking to each other from a distance whenever possible. For a team that often works together, it even changes how we eat together at the end of a long day. While our interview process is different, we are still fortunately able to work efficiently and get the information that we always need. It’s a brave new world and we’re still navigating the best way through it.

What is the most important thing for people to understand about these fires, even if they are living elsewhere in the country and don’t feel like they are directly affected by them?

I think what becomes most difficult for us is conveying the size and danger that these fires initially pose. Even after they blow through a neighborhood decimating it, the threat remains for days as weather conditions often change on a dime. People are living on the edge for days, if not weeks, and that’s often a point we try focus on. For those who don’t lose their home, they are surely impacted by the smoke and the evacuation orders.

I realize journalists like yourself are there to observe and report, but there’s also a human element to all of this. Have you found yourself assisting anyone in danger down there?

Because we are often going into scenarios as many are trying to leave, I haven’t come across someone in dire need of help. We often receive questions about escape routes and about the direction of the fires, which we are always happy to share.

Give us one specific rescue effort or an especially notable event you’ve observed that you haven’t had an opportunity to mention on-air.

We’ve watched many families pack the most important aspects of their lives into the back of a car in minutes. You feel for them as they scramble to decide what’s important and what’s not as they fill a trunk with their most cherished belongings. I’ll also always remember the airlifts at Hurricane Harvey—we were inside choppers that were airlifting people from flood waters. The same fear in their eyes is often what we see from those escaping the flames—two separate types of disaster with the same frightful feeling that hits you in the core.