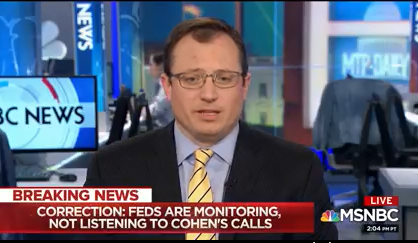 NBC News investigative reporter Tom Winter reported earlier today that federal investigators had wire tapped the phone of Pres. Trump’s personal attorney Michael Cohen, and were able to listen in on conversations associated with phone lines from Cohen. Winter had cited two separate sources “with knowledge of the legal proceedings involving Mr. Cohen” in his reporting.

If true, that’s pretty big news. But it didn’t turn out to be true, and NBC News had to issue a correction this afternoon after “three senior U.S. officials disputed that.”

Winter and NBC News then stated that there was actually no wiretap, but rather a “pen register,” which essentially means that federal investigators were monitoring Cohen’s phone calls by keeping a call log of them; but they weren’t actually listening in on those conversations.

There’s obviously a difference between tapping someone’s phones and keeping a log of their calls, though pen registers can be used to eventually obtain a wiretap if enough evidence is there.

CORRECTION: Feds have pen-register, not wiretap on Michael Cohen pic.twitter.com/gXLckdKPeX

Here’s Winter first reporting what he thought was a scoop MSNBC earlier today: