NEXT:Scoreboard: Tuesday, Nov. 13
PREVIOUS:Sean Hannity: 'CNN Claims to be "Facts First," But in Reality, They Put Their Hatred for Donald Trump Before Anything Else' 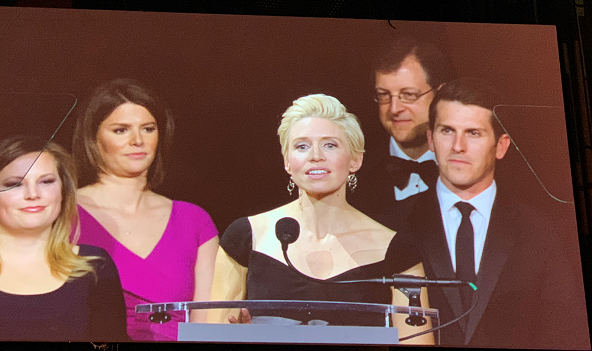 “Reporting on sexual harassment is an incredibly delicate assignment that is deeply personal for victims and has the highest of consequences,” said NBC News Capitol Hill correspondent Kasie Hunt as she accepted the Joan Shorenstein Barone Award on behalf of NBC News’ Capitol Hill team.

The award recognizes excellence in Washington-based Congressional or political reporting in the past year, honoring the memory of CBS News producer Joan Shorenstein Barone.

In the year we spent reporting on this, four members of Congress resigned in the wake of allegations related to sexual harassment. The House and the Senate have passed bills to change that incredibly arcane reporting process that discouraged victims from coming forward — and used taxpayer money to cover the cost of harassment settlements. But that work is still unfinished — a final bill hasn’t passed because of disagreements between the two chambers, particularly over the question of whether members of Congress should have to cover the cost of any sexual harassment settlement out of their own pockets — instead of on the taxpayer dime.

These NBC Newsers focused their reporting on allegations of workplace harassment on the Hill, but their own employer has had issues concerning allegations of harassment over the past year. For one, Nov. 29 will one year since Matt Lauer departed NBC News after a “detailed complaint” of “inappropriate sexual behavior.”

“This award is a recognition not only of the words written or packages produced – but it’s a testament to their courage and their strength in coming forward,” remarked Caldwell.