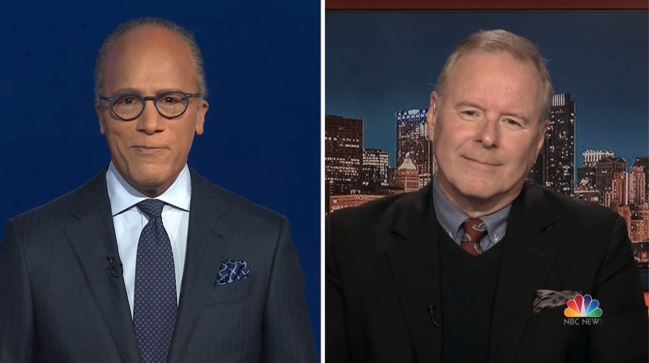 NBC News correspondent Kevin Tibbles is retiring, and NBC Nightly News aired a special tribute this evening to honor his lengthy career with the network.

“Kevin, so many of us have looked forward to your stories that remind us of all the good out there and good people,” Lester Holt told Tibbles after the two-minute-long taped tribute aired. “On behalf of your colleagues and our viewers, thank you for your storytelling and for your integrity and for lifting us up every night.”

Tibbles has been with NBC News since 1995, based out of Chicago for the past 20 years. He has reported from warzones in Iraq, Bosnia, Afghanistan, Rwanda, Kosovo and beyond. He also covered the death of Princess Diana, was on the ground in New Orleans for hurricanes Katrina and Rita and was stationed in Chicago’s Grant Park when Barack Obama was elected president in 2008. He also covered five Olympic games for NBC.

Tibbles’ work from Iceland, Thailand, Panama, Dubai and beyond was also featured on Today show, and he has covered a variety of newsmakers including Nelson and Winnie Mandela, Tony Blair, David Petraeus, Mikhail Gorbachev; and the father of 9/11 hijacker Muhammad Atta, who was tracked down in Cairo in the immediate aftermath of the attack.

Tibbles also hosted the series Meeting America on Meet the Press and America’s Correspondent and We The People for Nightly News.

A native son of Canada, Tibbles spent 15 years as a National Correspondent for the Canadian Broadcasting Corporation (CBC) before joining NBC News. At CBC, he covered stories including the fall of the Berlin Wall and the first Gulf War.

“Lester, it has been an honor, obviously, so many experiences, so many people, and I have traveled around the world and across this country—from North to South, East to West,” said Tibbles. “It has been a blessing working for you, working for NBC News. I only have friends, and it has been great bringing stories of ordinary, regular people to the rest of the nation.”

WATCH: @kevtibs is signing off after a decades-long career covering stories that took him all over the world. @LesterHoltNBC remembers some of Tibbles’ best moments. pic.twitter.com/QNVZgIa34a