NEXT:CBS This Morning Executive Producer Ryan Kadro Will Leave the Network on Jan. 4
PREVIOUS:Bill Gates Tells Chris Wallace Government and Tech Need to Have Better Dialogue, 'and There Will be New Types of Regulation for These Companies' 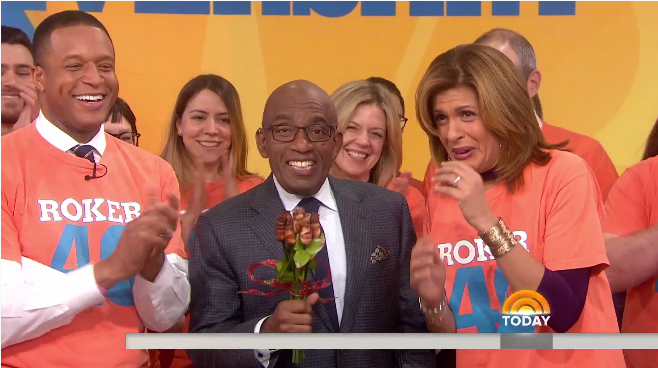 There have been many highs and some lows at NBC News over the years, but there’s a certain meterologist from Queens who has remained a steadying force through it all.

The morning television legend –whose career started began all the way back in 1978 at WKYC-TV in Cleveland– celebrated his 40th anniversary at NBC this morning, receiving love from colleagues, past and present, as well as a variety of celebrities and other Today show mainstays.

“From the moment I stepped foot in WKYC in Cleveland to getting a job at WNBC, I thought I’d died and gone to heaven because my parents could actually turn on the TV and see me, to being here with all of you, it’s been an amazing ride,” Roker said.

After years working for the NBC affiliates, Roker joined Today show in 1996, when Willard Scott had announced his semi-retirement. In the years since, Roker’s tenure at Today has included 2,200 wakeups at 3:45 a.m., 24 Rose Parades, 23 Thanksgiving Day Parades and 11 Olympics.

Roker’s wife, ABC News’ Deborah Roberts, and their son also surprised him on set with a birthday cake and brought him to tears.

Yes, we are absolutely crying after watching @alroker’s wife, @DebRobertsABC, and son bring out a cake for him on his 40th anniversary with NBC! #ALiversary pic.twitter.com/SjKhadew6H

And love from colleagues:

He’s the quickest wit on TV. After 40 years, you might think @alroker plans those quips, but after working with him for decades, I know they flow from his brain to his tongue in a nanosecond & they’re always funny/cute/incisive/poignant. @TODAYshow #ALiversary congrats buddy!

Honored to be among the many who have been on ⁦@TODAYshow⁩ with a true Hall of Famer and tv legend.
From one kid from Queens to another..Congrats on 40 years. You are the best. #ALiversary pic.twitter.com/GuRxuedE5O

“Nobody works harder and nobody has more compassion for those we cover who are victims of storms and bad circumstances,” said NBC Nightly News anchor Lester Holt in a tribute video to Al.
“It was the day that I had just come out of breast cancer surgery, and I was sitting in my hospital room,” Hoda Kotb said. “He walked in, and I’ll never forget that as long as I live.”

“I remember when my husband Jay died in 1998, Al was so incredibly supportive and caring,” said former Today anchor Katie Couric. “That compassion, humor and work ethic define a beloved member of the Today family who hopefully has many more milestones to come…Here’s to another 40 years. Love you, Al.”