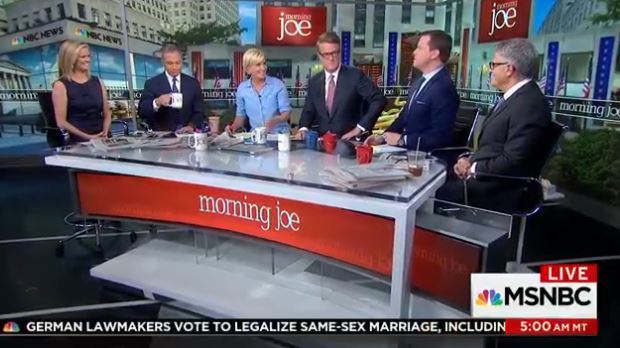 Joe and Mika have had their say. President Trump has tweeted his response. And now the National Enquirer is responding to an accusation that Pres. Trump was prepared to spike a negative story in the supermarket tabloid about the MSNBC hosts, if they apologized for their coverage of Trump.

That accusation was made this morning when Joe Scarborough and Mika Brzezinski appeared on their show to discuss the tweets Trump leveled at them yesterday.

“We got a call that the National Enquirer is going to run a negative story,” said Scarborough. “And they said, ‘if you call the president up and you apologize for your coverage, then he will pick up the phone and basically spike the story.’ Three people at the very top of the administration calling me, and the response was like, ‘are you kidding me?’ I don’t know what they have. Run a story. I’m not going to do it,” Scarborough said.

Trump fired back 90 minutes later saying it was Joe who called him:

Watched low rated @Morning_Joe for first time in long time. FAKE NEWS. He called me to stop a National Enquirer article. I said no! Bad show

And then Scarborough responded:

Yet another lie. I have texts from your top aides and phone records. Also, those records show I haven't spoken with you in many months. https://t.co/TZWiElo6Gs

“We have no knowledge of discussions between the White House and Joe and Mika about the story and no involvement in those discussions,” said the tabloid’s editor in chief Dylan Howard in a statement.