NEXT:Ben Mayer Moves From Peacock to NBC Nightly News as Senior Broadcast Producer
PREVIOUS:Thursday, Nov. 18 Scoreboard: Fox News, The Five Repeat as No. 1 Across the Board 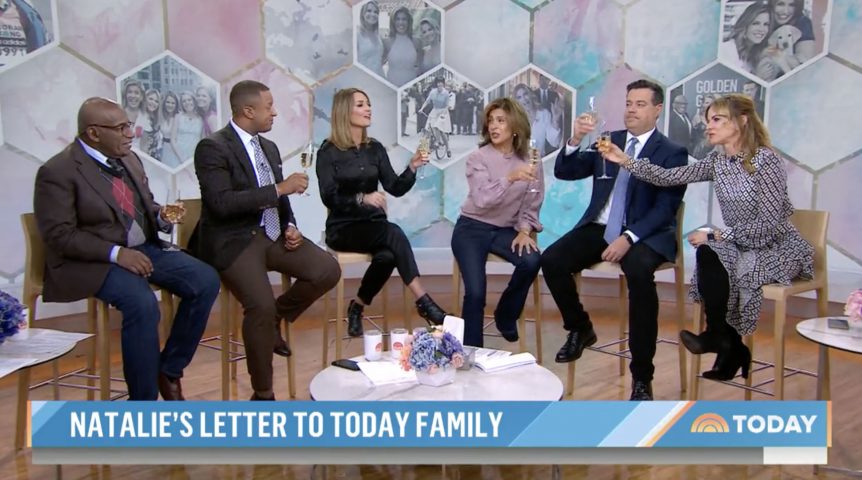 After 22 years at NBC, Natalie Morales said goodbye to viewers for the final time.

In a touching letter read to viewers Friday morning, Morales thanked them for their support over the years and looked back at some of her career highlights.

“Dear viewers … From the minute I stepped in front of the camera and into your living rooms, I knew it was an honor to be part of your morning tradition, the most sacred time,” she read.

Morales returned to the program to promote her Dateline interview with Drew Peterson, airing tonight.

“I traveled the country with some of America’s leaders and covered the most incredible stories, like the rescue of 33 Chilean miners trapped underground for 69 days. Together we witnessed a miracle. I have enjoyed two royal weddings and held court in London awaiting the first royal birth in decades. Events forever on my highlight reel,” she continued.

“Never one to shy away from a chance to try something new, I’ve had so many amazing adventures,” she said. “We’ve had a lot of laughs. Many at my expense, I’m sure you would agree. And have shared moments that matter most, as both my children were born. I felt your well wishes, and you have felt my joy seeing them grow up.”

“I feel like we all have been on this journey together.”

After 22 years, @nmoralestv is signing off from NBC. We’re taking a look back at some of her most memorable moments and celebrating our time together. pic.twitter.com/v4TTlL8Uw1

“Dear viewers, you and my Today family have given me a place I will forever call home. Thank you for all those mornings and the lifetime of memories we now share. With all my love and gratitude, Natalie,” she finished.

“For 22 years, no matter what you have done, Natalie, you are still the same person,” said Al Roker. “You have always been a good friend to everybody who has been her, and you treat everybody equally.”

Morales first announced she was leaving NBC last month after 15 years with Today. She joined CBS’ The Talk as a co-host, making her debut Oct. 11.

Morales spent 22 years at NBC, starting out at WVIT, the network’s Hartford affiliate, before joining MSNBC in 2002 as a correspondent. She moved to the national network and Today four years later as a national correspondent, and was named co-anchor of Today’s third hour in March 2008. In May 2011, it was announced that Morales would replace Ann Curry as news anchor for Today when Curry succeeded Meredith Vieira as co-host of Today in June 2011.

In May 2016, Morales moved to Los Angeles to host Access Hollywood, swapping roles with Billy Bush, and she was also named Today’s West Coast anchor. In 2019, Morales left Access Hollywood and has maintained her spot on Today. She was named Dateline correspondent last October.