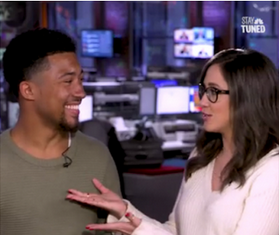 NBC News has hired Lawrence Jackson as the newest co-host of Stay Tuned, the network’s twice-daily news show on Snapchat.

Jackson heads to NBC News after a stint as a host and correspondent for MTV’s TRL (or Total Request Live for those of you over 25). Before MTV, Jackson was a host for Revolt TV, the music cable network launched by Sean “P. Diddy” Combs.

Jackson will host Stay Tuned on weekends, while Savannah Sellers and Gadi Schwartz remain the show’s co-hosts during the week.

Stay Tuned launched in July 2017, and it averages more than 25 million unique monthly viewers, 75% of whom are under the age of 25.

The show airs weekdays at 7 a.m. and 4 p.m., and weekends at 1 p.m. Each episode runs roughly two to three minutes in length, with four or five segments covering national and international news stories, politics, pop culture and more.