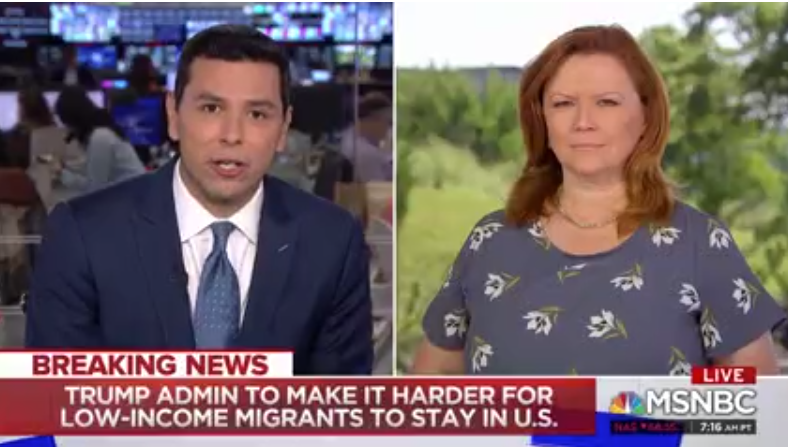 A bit of disagreement between MSNBC newsers took place on-air morning. That’s something we’re not necessarily used to seeing these days.

MSNBC anchor Ayman Mohyeldin defended himself on Twitter this morning not long after longtime NBC News White House correspondent Kelly O’Donnell appeared to reprimand him during one of her hits in the 10 a.m. hour.

Mohyeldin made the statement that Acting Director of United States Citizenship and Immigration Services Ken Cuccinelli had announced a new policy to make it more difficult for low-income immigrants to become permanent U.S. residents.

“We know President Trump proposed this update last year, according to our own reporting. According to the former Homeland Security secretary, it’s designed to promote immigrant self-sufficiency to ensure they are not likely to become burdens on American taxpayers.

We know the president has always had a preference for immigrants from Nordic countries. He’s made that very clear as opposed to other more disadvantaged countries. Walk us through the impact on these immigrants. Why now?”

“I don’t know that the president has expressed a preference for Nordic countries. That is something where I’m not sure where you’re getting that from.”

“He certainly said he has an emphasis on merit-based immigration, and he has talked about that extensively. So that matches up to his rhetoric. This change in policy is certainly going to have an impact on immigrants who are here who are utilizing any type of public sort of support, whether it be food stamps or general assistance or any kind of public support. And that is a great concern for immigrants who are having difficulty making ends meet and how that would effect their ultimate move toward getting a green card. Immigrants who currently possess a green card may not see any difference. This will not have any effect, we’re told, for those who are here under a refugee status for asylum seekers. So this is looking at ways, according to the trump administration, to look at the laws related to immigration and to try to sort of funnel the president’s rhetoric policies and views into ways to tighten the legal immigration status. There will be many critics who say this is putting a greater burden on immigrants. And others will say this is trying to emphasize what the president talks about. Trying to have immigrants who come to the country who can economically take care of themselves. that’s what Ken Cuccinelli is talking about. Of course the president is here in New Jersey, not back at the White House…”

Celebrity chef (and ardent MSNBC viewer) Tom Colicchio took note of the remarks, and tweeted at Moyheldin, who then responded by tweeting:

Thanks @tomcolicchio. There have been so many disparaging comments made about immigrants by this President, it’s understandable why this would have been forgotten. https://t.co/RUDQAxADS4

Of course I know the reference but there is a difference between something said in private meeting and today’s actual public policy proposal I try to stick to what we can report and not a flip comment.

Esquire’s Charles Pierce, who regularly expresses his disdain for President Trump, also tweeted at O’Donnell with the above-mentioned Vox story, before adding: “Kelly O’Donnell just said she “didn’t know where” her host was “getting the idea” that the president* prefers immigrants from Nordic countries. Her own network is here to help.”

The Daily Beast‘s Justin Baragona was the first to report on this exchange.