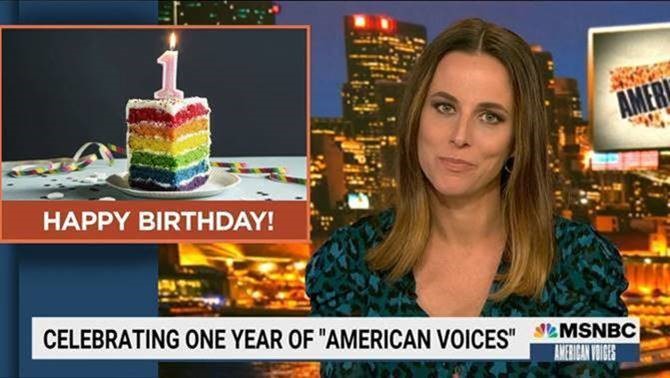 On Sunday evening, MSNBC host Alicia Menendez marked her one-year anniversary as host of American Voices, an analysis program which airs from 6-8 p.m. ET on MSNBC.

When announcing the launch of American Voices last September, MSNBC remarked that Menendez “will spotlight the week’s biggest political stories and focus on under-reported issues with under-represented voices that require a national platform.”

She has tried to stick to that plan.

“Launching a show in the middle of a global pandemic, in the run up to a presidential election, with a team that has spent less time together in person than Mike Lindell has spent making pillows, well it was as wild as you’d imagine,” Menendez remarked last night, adding, “I think of our interview with Hispanic voters in Florida, our one-on one with Keldy Mabel Gonzáles Brebe de Zúniga, one of the first moms to be separated from her children by the Trump administration, and one of the first to be reunited.

“I think of the superintendents in the South and Southwest who’ve risked their own pay checks to buck masks mandate bans and protect their students, I think of every guest who has made one of their first cable news appearances on this show and gone on to become a regular voice and the face that you look forward to hearing and seeing.”

Menendez also made a point of thanking the production team behind American Voices. “Thank you to our team for bringing all of this to life and thank you for trusting us to bring the news, provide context, focus on solutions and to challenge notions of who gets to be an expert and whose option matters. Your trust in us is privilege and an honor,” she said.

Menendez’s weekend evening program had served as the lead-in to The Week with Joshua Johnson. However, MSNBC recently made some programming shifts and Johnson is moving to the network’s streaming news platform, NBC News Now. American Voices will now lead into Ayman Mohyeldin‘s new weekend primetime show on Saturdays, and Mehdi Hasan‘s show on Sundays.

Menendez joined MSNBC as a weekend anchor in October 2019 after a stint as a contributor on PBS’ Amanpour & Co. Before her tenure at PBS, Menendez hosted a nightly news and pop culture show on Fusion called Alicia Menendez Tonight. She is also a former HuffPost Live host, and the daughter of New Jersey Sen. Bob Menendez.