NEXT:Scoreboard: Wednesday, August 16
PREVIOUS:Carol Costello is Back, And She's Not Messing Around

Whenever President Trump finds himself embroiled in controversy, cable news generally sees significant ratings improvement. This has been especially true for MSNBC, which has become the resistance network for the Trump era.

MSNBC was nowhere close to being a player in the cable ratings race not too long ago, averaging just 579,000 prime time viewers in Q4 2015.

That’s not the case anymore, it finished Wednesday as No. 1 network across all of cable TV. Not only was MSNBC the most-watched cable network across total sales day (6 a.m. – 2 a.m.) for the first time in its history, but it also finished No. 1 in prime time, both in total viewers and among adults 25-54.

In addition to being No. 1 across total day and prime time, MSNBC was the No. 1 cable network across the 5 – 8 p.m. time period.

MSNBC beat rivals Fox News and CNN, who, to be fair, each had a pretty strong day in their own right. 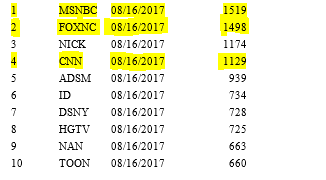 MSNBC was, per usual, led by Rachel Maddow and Lawrence O’Donnell. Their respective shows were No. 1 and No. 2 across cable on Wednesday in total audience.

Maddow ranked No. 6 and O’Donnell finished in 10th across all of U.S. TV yesterday, a rarity for the cable news network.