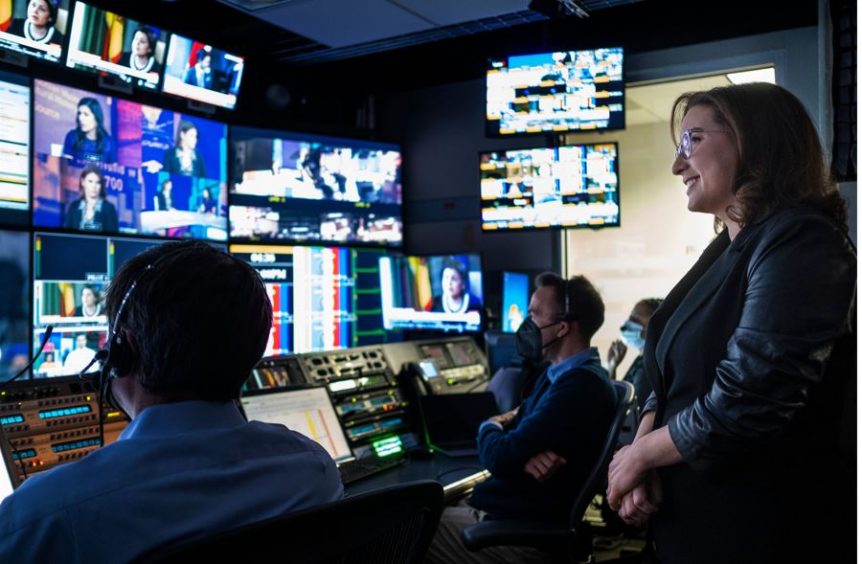 MSNBC announced Tuesday that senior vp of content strategy Rebecca Kutler will now oversee all of MSNBC’s non-linear editorial efforts — streaming, digital and audio. She effectively replaces Catherine Kim, who is now focusing on editorial oversight across all of NBC News.

Kutler, who joined MSNBC in September after 20 years at CNN, has exclusively focused her efforts on streaming up to this point, taking the lead on the development of the MSNBC hub on Peacock. Kutler will now oversee MSNBC Digital’s editorial efforts for the network and its individual news programs.

In addition to streaming and now digital, Kutler will also add MSNBC’s audio initiatives to her portfolio, including Rachel Maddow’s Ultra – which debuted at No. 1 on Apple podcasts – The Revolution with Steve Kornacki, Why Is This Happening? With Chris Hayes, Into America with Trymaine Lee, which was nominated for two NAACP Image Awards, and more.

Prior to her arrival at MSNBC this past fall, Kutler oversaw daily programming for the now-defunct CNN+. In addition to her duties on the short-lived subscription streaming news service, Kutler oversaw all analysts, contributors and commentators for CNN Worldwide, a job she held from 2015-2022.

Kutler previously served as a CNN executive producer across multiple dayparts and launched several of CNN’s high-profile shows, working closely with John King as the ep of Inside Politics and the now-defunct John King USA. She also served as a senior producer for the network’s election nights and presidential debate coverage.

All,
I am excited to share that effective immediately, Rebecca Kutler will oversee all non-linear editorial efforts for MSNBC, adding digital and audio to her streaming responsibilities, as Catherine Kim shifts her focus to editorial oversight across NBC News.

Since joining MSNBC in September, Rebecca has taken the lead on the development and implementation of the network’s content and streaming initiatives, including the MSNBC hub on Peacock. Rebecca will now oversee MSNBC Digital’s editorial efforts for the network and individual news programs.

She will also add MSNBC’s audio initiatives to her portfolio, building on the network’s record of success in the field, including Rachel Maddow’s Ultra – which debuted at #1 on Apple podcasts – The Revolution with Steve Kornacki, Why Is This Happening? with Chris Hayes, Into America with Trymaine Lee, which was nominated for two NAACP Image Awards, and more.

She will report to me and work in lockstep with Chris Berend and his organization on our overall News Group digital strategy.
With Rebecca’s decades-long experience across cable, digital, and streaming, along with her keen understanding of news audience engagement, this expanded purview will bring together MSNBC’s expansive non-linear efforts under one centralized umbrella.

Meredith Bennett-Smith, our digital managing editor, will report to Rebecca and work hand-in-hand with her to continue MSNBC Digital expansion. Over the past two years, Meredith and her team have helped supercharge our growth across the web, social, video, and newsletters. Chris and I are excited for the opportunity to bring all our digital, streaming, and audio efforts closer together.

Please join me in congratulating Rebecca on this expanded role, and Meredith on her continued success.