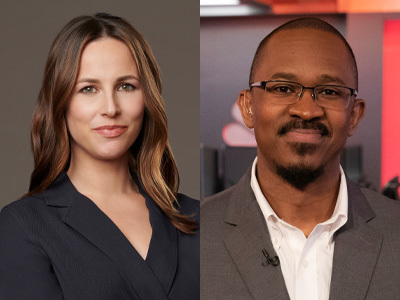 MSNBC is making some big changes to its weekend prime-time and weekday early morning lineups.

The network has tapped Alicia Menendez and Joshua Johnson to anchor two new weekend prime-time shows. It is also reviving Way Too Early on weekday mornings, which will be anchored by Kasie Hunt, who will end Sunday night’s Kasie DC to focus on the new show.

Starting Sept. 19, American Voices With Alicia Menendez will air weekends from 6-8 p.m. ET. Menendez will spotlight the week’s biggest political stories and focus on “under-reported issues with under-represented voices that require a national platform,” according to the network.

Following that program will be The Week With Joshua Johnson, airing weekends from 8-10 p.m. It will feature “candid conversations” with regular people and newsmakers about the week’s major stories.

In other weekend changes, anchor Yasmin Vossoughian will host MSNBC Live on Saturdays and Sundays from 3-5 p.m. That time slot had previously been hosted by a rotating group of anchors, including Menendez, Johnson and Lindsey Reiser.

Additionally, the network is reviving the weekday morning show Way Too Early, which Hunt will anchor at 5 a.m from Washington, D.C. Called Way Too Early With Kasie Hunt, the show will lead into Morning Joe.

Sunday night, Hunt will host the final episode of Kasie DC, before moving to Way Too Early, which debuts Sept. 21.

Way Too Early originally debuted in 2009, hosted by Willie Geist, and aired through 2016.