NEXT:CNN Is Closing Its Offices to 'All Employees Who Do Not Have to Be in the Office to Do Their Jobs'
PREVIOUS:Jim Cramer Says He Has Tested Positive for Covid-19, Will Host Mad Money From Home 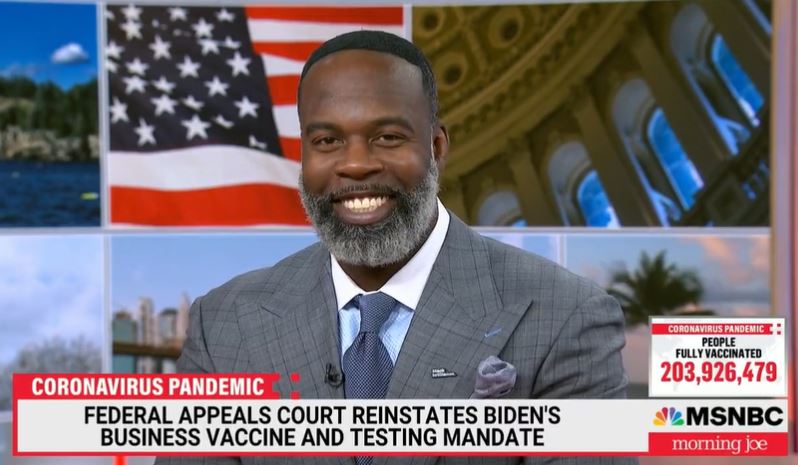 This, right before Coleman joined the program to offer his analysis of the federal appeals court decision to reinstate President Biden’s business vaccine and testing mandate, and how Republican state attorneys general groups plan to appeal Friday’s decision to the Supreme Court.

After thanking Brzezinski and the MJ team for the warm welcome, Coleman said:  “In terms of what you will see from the Supreme Court, I think in large part you will see a punt back to the states, in terms of deference. Your [Scarborough’s] point in terms of what likely will happen in terms of differing to the federal government and deferring to the executive is likely to happen, but there are so many approaches that are being taken across the board, with respect to states.

“I know that OSHA made this ruling and I know the question with regard to the Sixth Circuit was: Was there an overreach? Could they basically use emergency powers in terms of being able to mandate this vaccine requirement in the private sector? And they found that they could. They found that basically this was such a situation of grave importance. This was such a grave threat to public safety and the safety of workers that they could.

Coleman spent 3 1/2 years as a senior assistant district attorney in the Kings County DA office. He has also served as a senior trial lawyer and civil litigation attorney for the US Equal Employment Opportunity Commission.