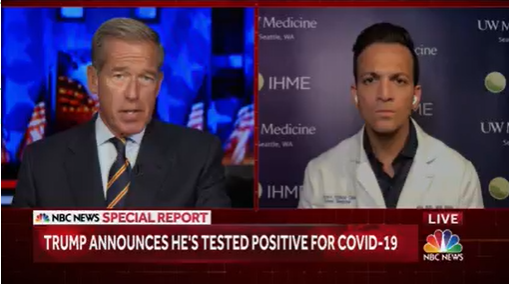 Not only is that the largest total audience in network history, but it’s also the second-largest audience on cable television, only behind rival Fox News and that network’s outrageous 4.9 million viewer average.

Compared to October 2019, which of course was not the month before a presidential election, MSNBC delivered +38% growth in total prime-time viewers and +45% growth in the prime-time demo. In total day, MSNBC grew +29% in total viewers and +35% in total day demo. MSNBC drew fewer viewers for its debate coverage than Fox and CNN, which is probably why there’s less year-over-year growth for the network than what you saw for FNC and CNN.

MSNBC was stuck in third place behind CNN in total viewers before the election, and only since Trump was elected has the network moved to No. 2 in total viewers. It remains third in the demo.

Morning Joe and The Rachel Maddow Show each had their most-watched months ever, averaging 1.6 million and 3.8 million total viewers respectively, while The 11th Hour With Brian Williams swept the 11 p.m. cable news competition in both total viewers and among adults 25-54. Williams delivered MSNBC’s largest adults 25-54 audience in the 11 p.m. time slot since April 2003.

NEW YORK (October 27, 2020) – MSNBC posted the highest-rated month in the network’s 25-year history and ranked #2 in all of cable during a crucial month for Decision 2020 coverage, according to Nielsen. Total day (M-Su 6am-6am), dayside (M-F 9am-4pm) and prime (M-Su 8pm-11pm) all beat CNN in total viewers and posted double-digit growth compared to October 2019.

Total day ranked #2 across all of cable television for the 6th straight month, drawing 1.5M total viewers – an all-time high (ahead of #3 CNN, #4 ESPN and #5 HGTV) – and easily topping CNN’s 1.4M. In total viewers, total day increased viewership by double digits (up +29% compared to October 2019). In A25-54, total day scored its best audience performance since November 2012, averaging 247K viewers and increasing viewers by +35% compared to October 2019.

“The Rachel Maddow Show” dominated in October, scoring its highest-rated month ever and topping CNN for the 89th consecutive month. In total viewers, “Maddow” averaged 3.8M (vs. CNN’s 2.4M), a +19% increase in viewership compared to October 2019. “Maddow” also posted its highest-rated A25-54 delivery since September 2018 with 644K viewers, a +11% increase compared to October 2019.

The commercial-free television premiere of “The Way I See It” on MSNBC delivered a record 4.2M total viewers (10pm-11:40pm) on Friday, October 16 and over 6M across all airings, according to Nielsen. The documentary, co-presented by Focus Features and MSNBC Films, ranked #2 in all of television in the timeslot and achieved the network’s highest-rated non-news, non-live program ever in MSNBC’s 25-year history. In A25-54, “The Way I See It” drew just under 1M viewers across all airings (618K for the initial). This was the 1st project from the newly formed NBC News Studios, an in-house production studio that primarily produces documentary films and series.

MSNBC digital reach has grown in 2020 increasing viewership by +40% compared to 2019, according to Comscore Media Metrix. MSNBC digital video viewership and engagement has spiked in 2020 with an average of 162M monthly video views marking the strongest year on record and up +42% compared to 2019 in full. MSNBC’s video views within the political news competitive set ranks at #1 throughout 2020 topping CNN Politics by +113% and FOX News Politics by +469% on average. Viewers of the MSNBC political news set watch for an average 45 minutes per viewer, 3x more than CNN (15 minutes) and more than 2x that of FOX News (18 minutes).

NOTE: October ratings are based on Nielsen most current data day for 09/28/2020-10/25/2020. Individual show data for the month represents regular programming only, excluding specials and breaking news.