NEXT:25th Season of The View Will Feature Rotating Lineup of Guest Co-Hosts to Fill Seat Vacated by Meghan McCain
PREVIOUS:Friday, Aug. 27 Scoreboard: The Five Is No. 1 on Cable News 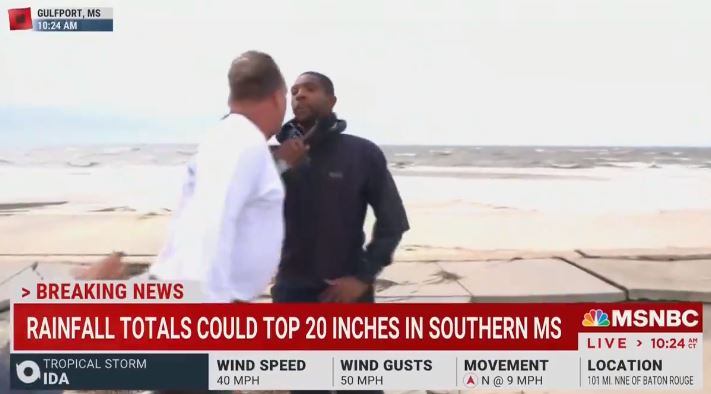 “Wacky guy” is a generous way of referring to the person MSNBC correspondent Shaq Brewster had to deal with Monday on a beach in Gulfport, Miss.

Brewster was delivering a live Hurricane Ida report for Craig Melvin‘s MSNBC hour, when all of a sudden an unhinged man confronted the correspondent and his crew.

Before the confrontation, Brewster had explained that the rain from Ida had stopped in the area and mail delivery had returned in Gulfport: “We saw postal workers going out to deliver mail this morning, the rain stopped, the wind is still going there …” Brewster added that the mayor of the town was still enforcing a curfew.

While Brewster was reporting, a white pickup truck pulled over in the background of his live shot, and a wannabe tough guy jumped out of the vehicle and started moving towards Brewster and his crew.

Keeping his composure, Brewster continued to deliver his report, but the man started shouting at both the crew and the correspondent.

After a while, Brewster said he needed to toss it back to Melvin in the studio, as the man was making it impossible for Brewster to finish his report. The guy started going nuts, got in Brewster’s face, and started yelling “report it accurately!”

Melvin later told his audience: “I do want to note here for a moment, you probably saw or heard a few moments ago a correspondent was disrupted by some whacky guy in his live shot there in Mississippi. Pleased to report that Shaquille Brewster is just fine. He is okay.”

Some guy jumps out of a pickup truck and angrily confronts Brewster’s crew, prompting a shaken Craig Melvin to express extreme concern for his colleague. pic.twitter.com/v1tYnUsqTj

Appreciate the concern guys. The team and I are all good!

MSNBC president Rashida Jones put out a statement Monday afternoon about what transpired in the morning, lauding Brewster for his poise: “Shaq Brewster is an exceptional journalist. Like the consummate professional, he did not let someone intimidate him from doing his job. We’re glad he and the team are safe, and we couldn’t be more proud and supportive of their work.”