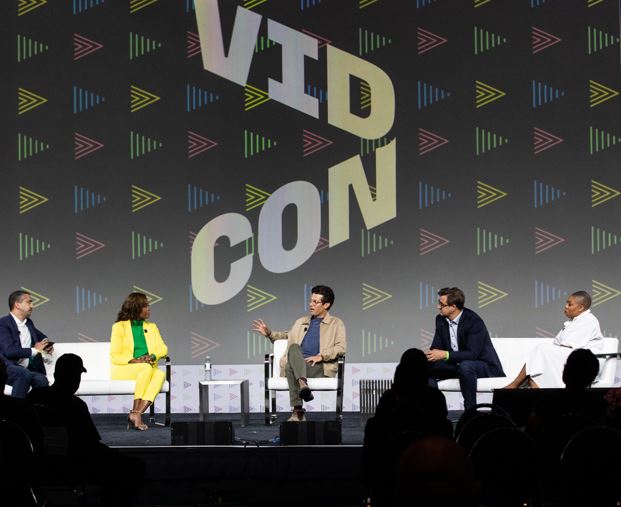 “The last live show we did actually was here in Los Angeles on a studio lot, the day before the California primary in 2020,” said Hayes. “We were supposed to do one the next week in Michigan. I was like, I don’t think we can get a bunch of people into a room together, a little thing called Covid … We love being part of the sort of kinetic feeling with an audience.”

Concerning the network’s coverage of today’s Supreme Court ruling, Jones said, “There are people who feel very strongly on both sides—and you’re going to get that coverage in a lot of places. What we bring to the conversation is a depth to what’s happening, why is it happening, what does it mean and to deliver a better understanding to our audience. So that’s really what our focus has been for now the last few hours is really trying to put into context, what’s happening, who it affects, how it affects them.”

In regards to MSNBC’s streaming strategy, Jones added, “There are 24 hours in the day, there are only so many shows you can launch ,so many people within the streaming space because you have VOD options and live options. You have much more real estate to try out some new things. You can throw some spaghetti at the wall and see if it sticks, but bring in new voices, new perspectives, people can look more like America and that’s really what we’re focusing on.”

Sanders echoed her boss’ sentiment about bringing the proper context to today’s coverage and concerning streaming news as a whole. “To your point about both linear and streaming, our focus is not only bringing that depth to the audience but bringing it to you wherever you are,” said Sanders. “So if you’re watching on cable, if you’re watching on Peacock, if you’re listening in the car, if you’re following along on social media, our focus has really been how do we bring that content to you where you are—in a way that provides the perspective that you need to understand what’s happening.”

Hasan echoed Jones’ and Sanders’ point about “context” and spoke about how so many of these “historic” stories have a degree of “interconnectedness.”

“I think Rashida put it best. We talk about any story, we have to bring context. We’ve got to find the interconnectedness. So many of the big stories of our time are connected. So when we talk about abortion, when we talk about the gun decision, that to me is not different to the democracy debate that our show and our network has been focused on for the last 18 months, two years, because the gun decision and the abortion decision is from an institution where five of the six Supreme Court justices were appointed by the President who lost the popular vote, two of them credibly accused of sexual misconduct, one of them sitting in a completely stolen seat.”