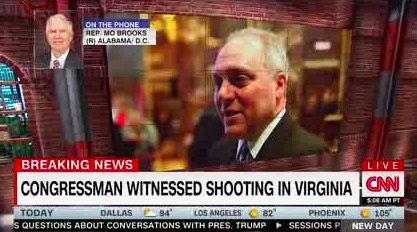 The cable and network morning shows are in breaking news coverage out of Alexandria, VA where just after 7 a.m. a gunman opened fire on a Congressional baseball practice. GOP Rep. Steve Scalise and at least 4 others, including the gunman, were shot.

“I’m on the third base side of home plate swinging the baseball bat because I was next up,” Alabama GOP congressman Mo Brooks reported on CNN’s New Day. “I saw the rifle. First I didn’t know what the bang was. Then I look and see the rifle and I got a glimpse of the shooter. At that point I ran around home plate and hid behind the batting cage. There were probably 10, 20, 30 shots fired.”

Rep. Brooks then noticed that his colleague, Rep. Scalise, who is in the GOP leadership, had been shot.

“He was dragging his body from the second base infield to the outfield to get away from the shooter,” said Rep. Brooks who applied pressure to Scalise’s wound. “The blood trail was about 10 to 15 yards long.”

There were about 30 people from the Republican team practicing for a congressional game which was to be played tomorrow night. 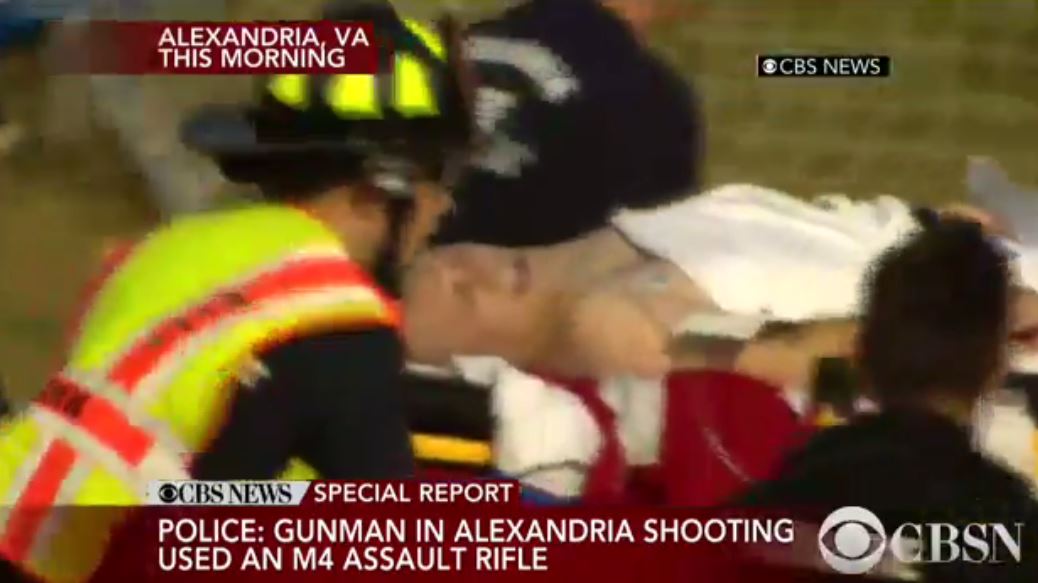 “I’m outside the perimeter,” Sen. Rand Paul said on Morning Joe. “I’m on the right field line and the batting cage is outside the field. And in the field I see Representative Scalise is shot but moving and he’s trying to drag himself through the dirt out into the outfield. There are two staffers in right field only about ten feet from me, but there’s about a 20-foot fence separating me from them. And they were laying down. But then I’m seeing the shots hitting the dirt around them. And they’re trying to make a difficult decision, do we lay here, stay low and hope he doesn’t hit us, or does the shooter just advance and come closer and shoot you?” 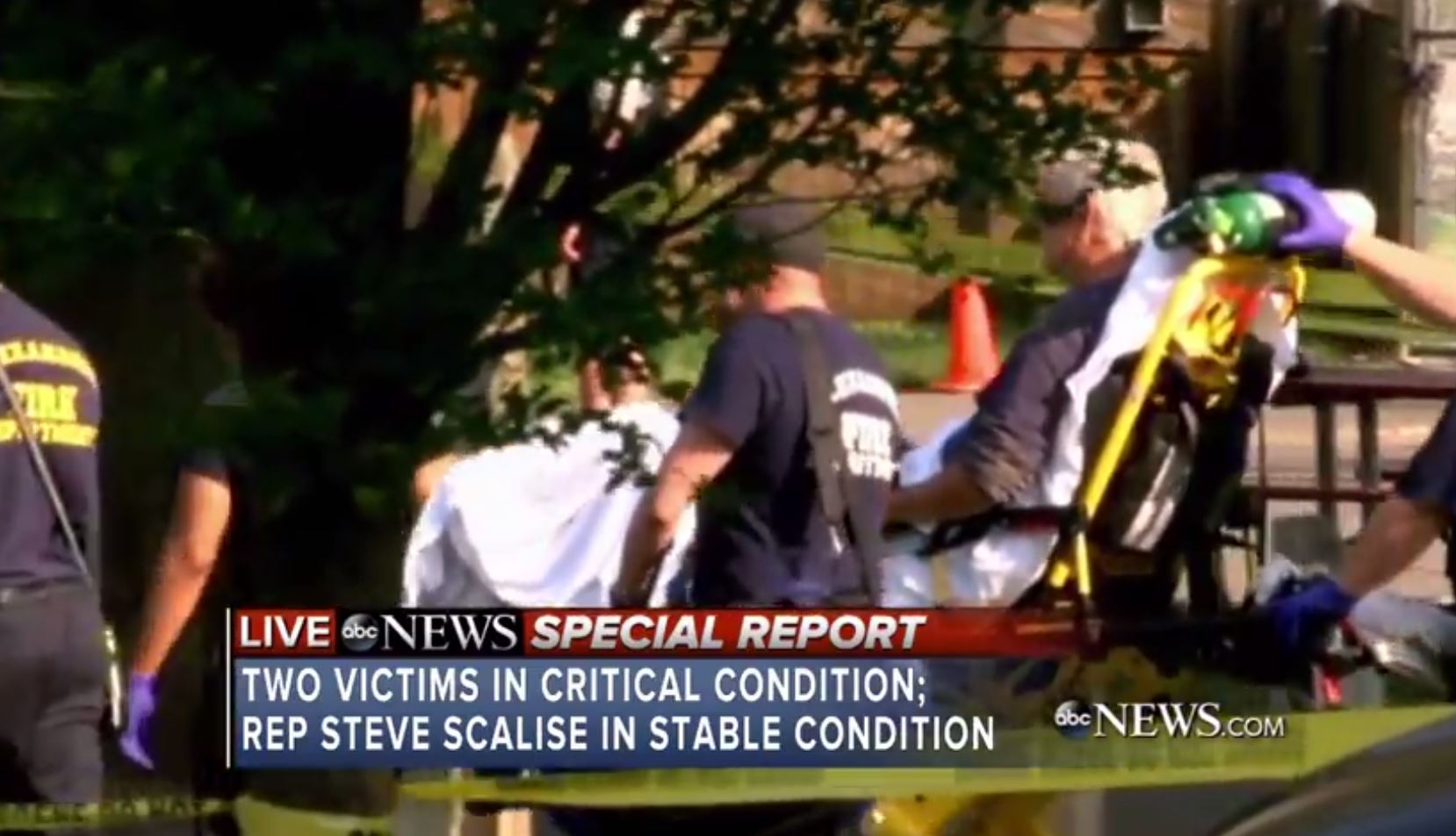 “My adrenaline is raging,” said Brooks on CNN. “Of course it’s never easy to take people around you getting shot and you don’t have a weapon yourself. So you’re pretty helpless.

The only weapon I had was a baseball bat.”

Scalise was hit in the hip and taken by helicopter to a local hospital. The gunman was taken into custody. Rep. Ron Desantis, Rep. Chuck Fleischmann, Rep. Rodney Davis, and Rep. Brad Wenstrup, who is a physician, were also at the practice. Fox News’s coverage included interviews with Paul, Desantis and Wenstrup.

HLN was first with the news at 7:34 a.m. ET, before it was known that Congressmen and their aides had been targeted. Fox News reported the news at 7:52, MSNBC at 7:55 and CNN at 7:56. ABC’s Good Morning America, NBC’s Today Show and CBS This Morning all broke in at 8 a.m. with special reports, which continue into the 9 a.m. ET hour. 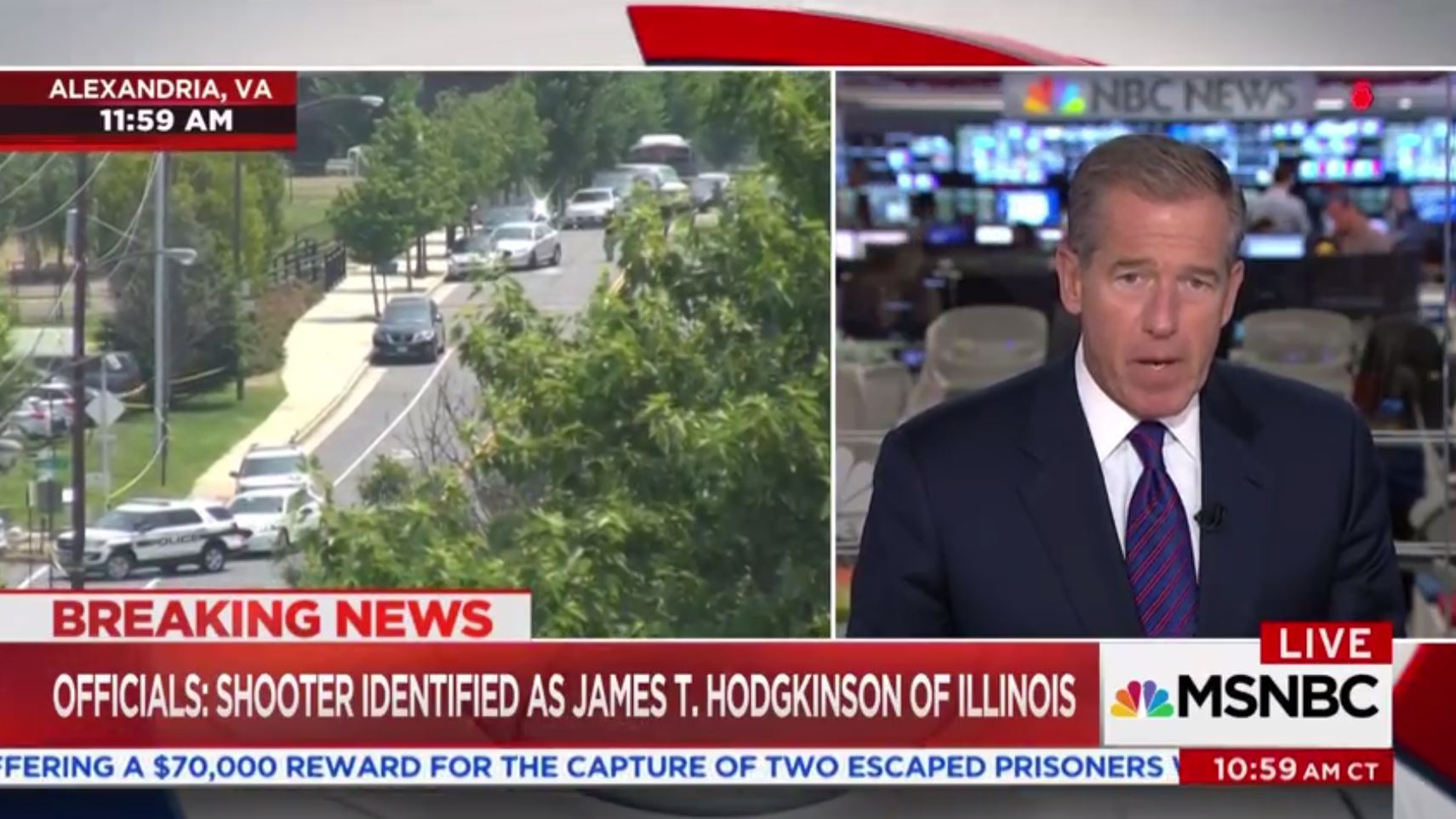 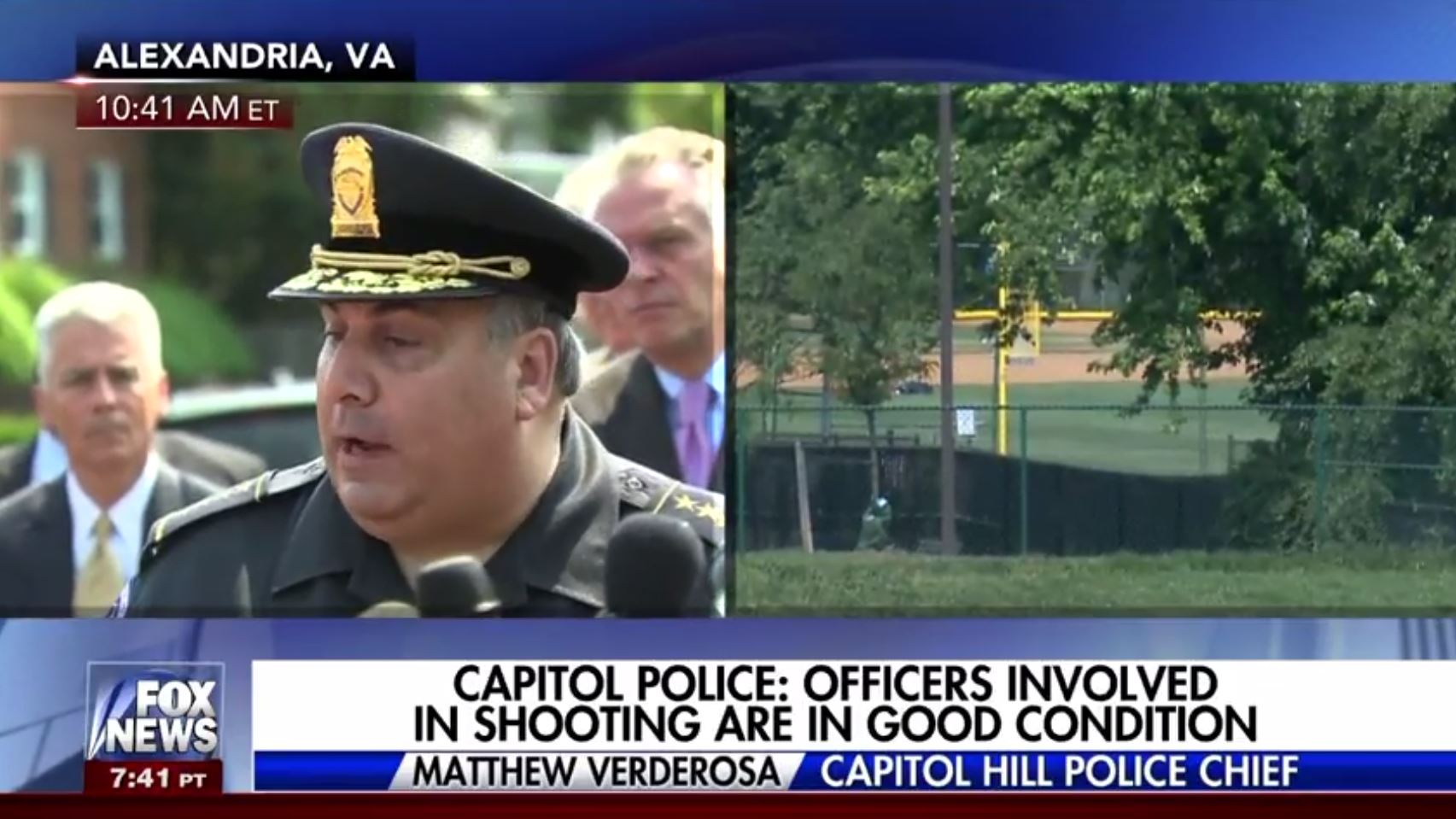 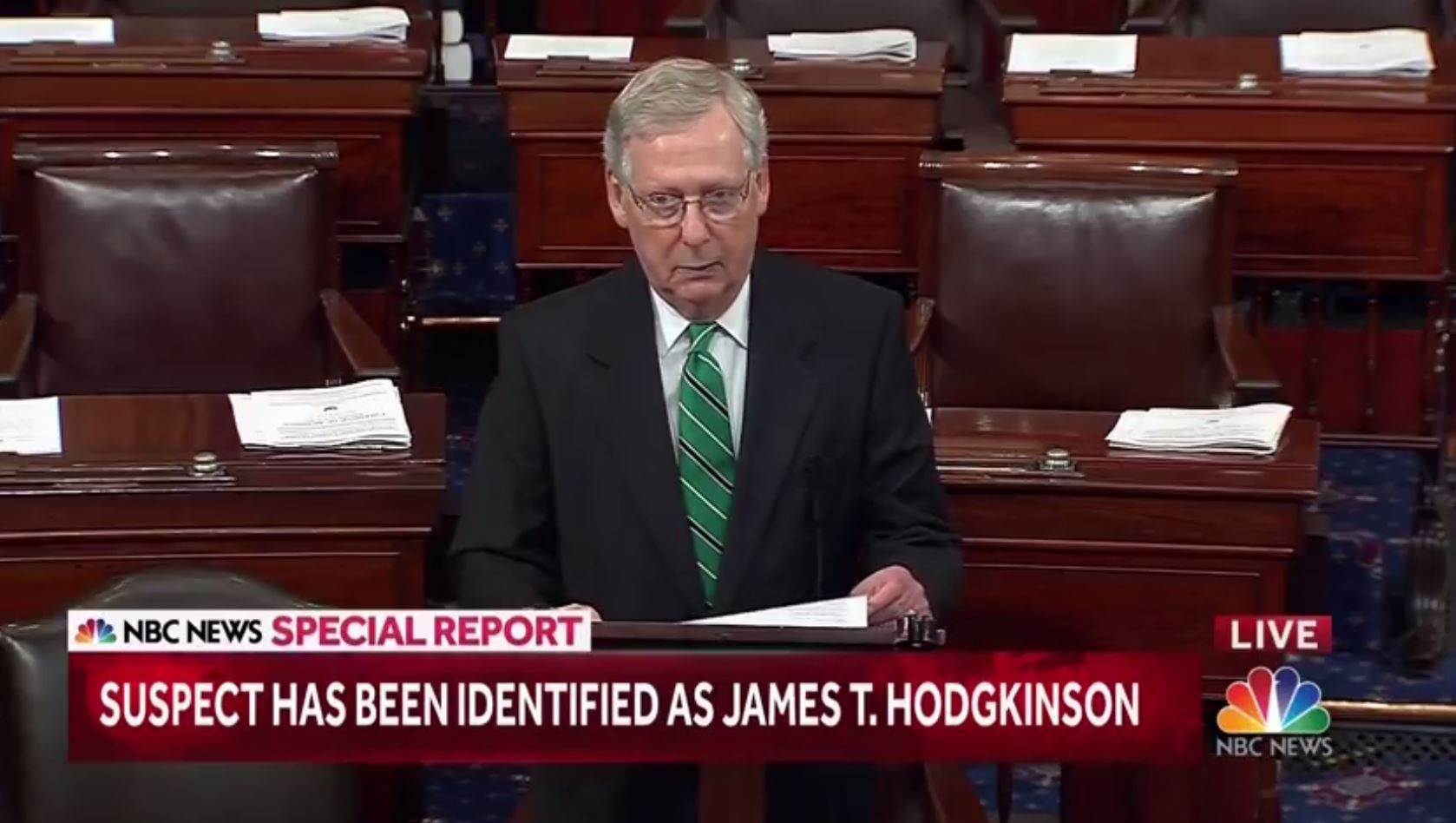 At 11:37, Pres. Trump spoke about the shooting and confirmed that the shooter, James T. Hodgkinson of Belleville, IL, had died from gunshot wounds. 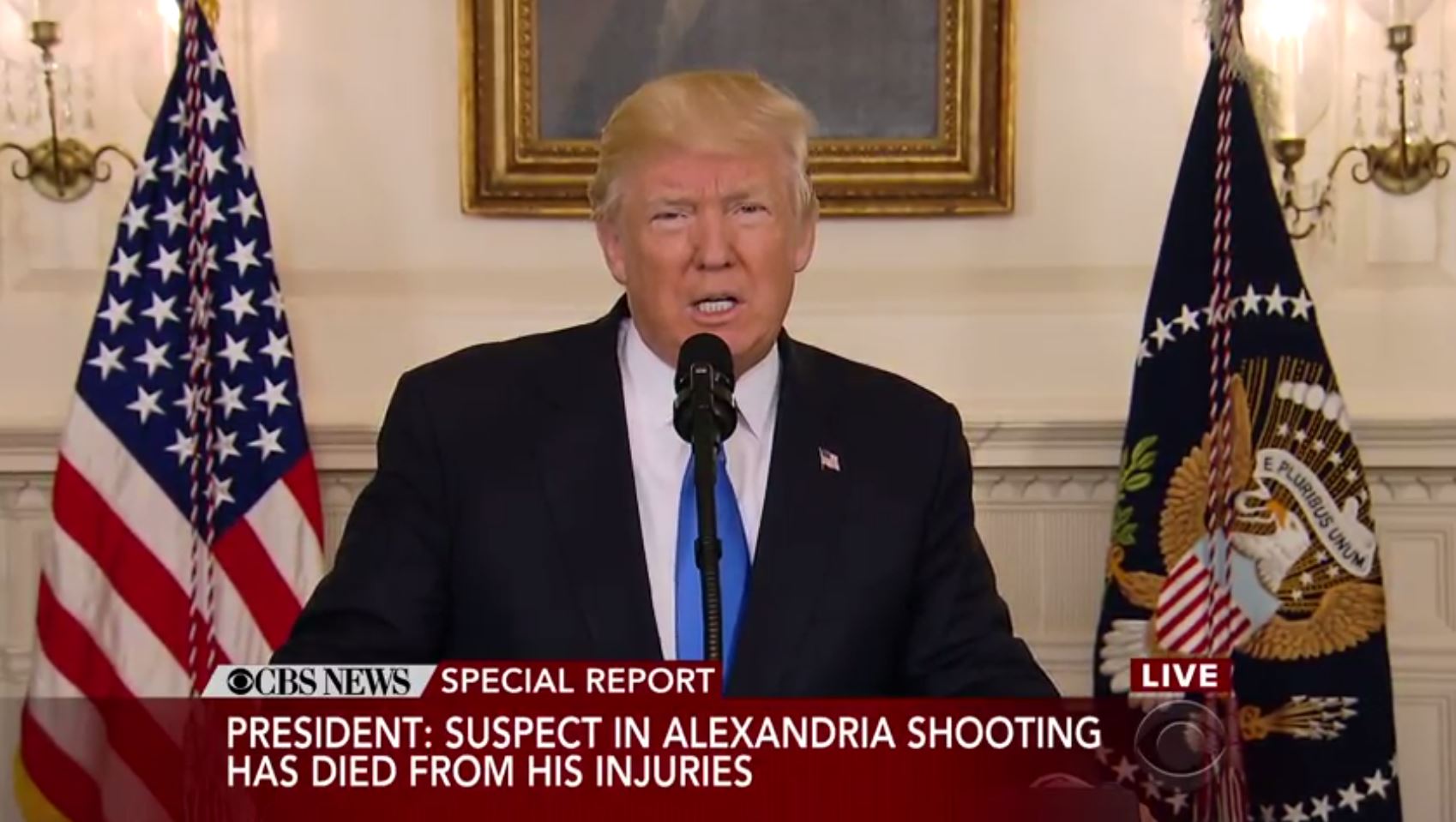 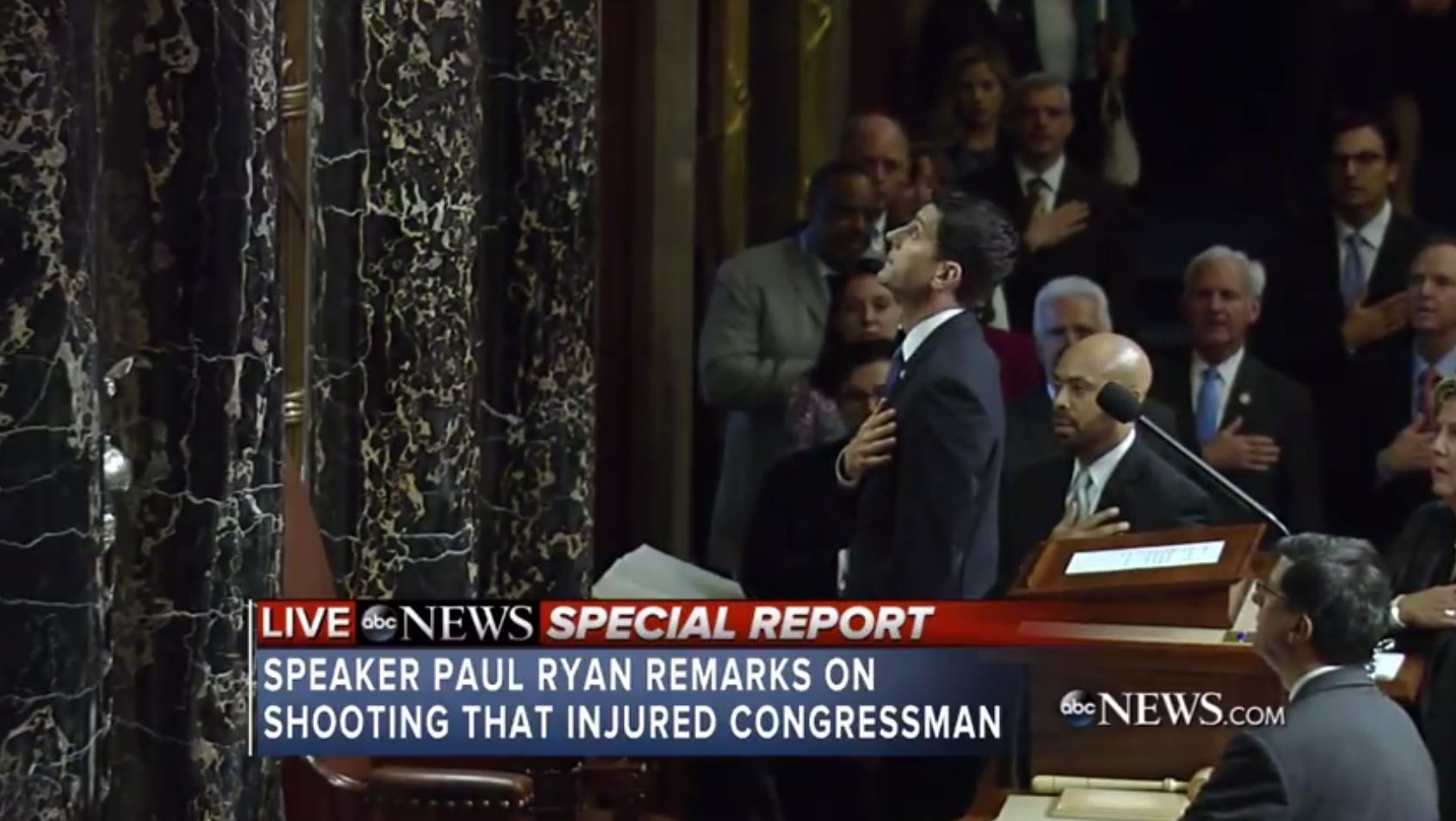 TONIGHT – @ScottPelley will anchor the @CBSEveningNews from Washington, D.C. Tune in for full coverage of the VA baseball shooting. pic.twitter.com/5MolToyWLF