NEXT:Here's Why Rachel Maddow Hasn't Been Broadcasting From Home During Her Quarantine
PREVIOUS:Lachlan Murdoch Says Fox Offices Won't Fully Reopen Until April at the Earliest

From late December 2019 through Nov. 2, 67% of U.S. adults who identify as Republican viewed Fox News favorably, according to Morning Consult’s Brand Intelligence, which tracks consumer attitudes of thousands of brands, while roughly 16% had an unfavorable view of FNC.

However, the network’s accurate decision to call the state of Arizona for now-President-elect Joe Biden on election night (doing so before the other major networks), and then calling the 2020 presidential election for Biden just minutes after the other networks did on Nov. 7, has apparently hurt its standing among a significant number of Republican voters.

According to a recent Morning Consult poll, the network’s favorability has tumbled among Republicans since Election Day, as the network has faced a consistent amount of criticism from President Trump.

Fox News Decision Desk’s projection infuriated the president and his supporters, and in the days since he has continued to attack the network on Twitter, saying its ratings have “completely collapsed,” criticizing its coverage of his supporters’ rally in Washington on Nov. 14, and suggesting that his followers turn instead to Newsmax or OANN.

It appears such rhetoric has impacted public opinion of the brand. In polling conducted Nov. 9-16, the network’s average favorability rating among GOP respondents has dropped 13 percentage points, to 54 percent, and the average share of those with an unfavorable view of the network nearly doubled, to 30 percent.

Trump supporters have taken their cue from the president. When they marched through the streets of Washington to protest the election, at several points during their demonstration they chanted, “Fox News sucks!” 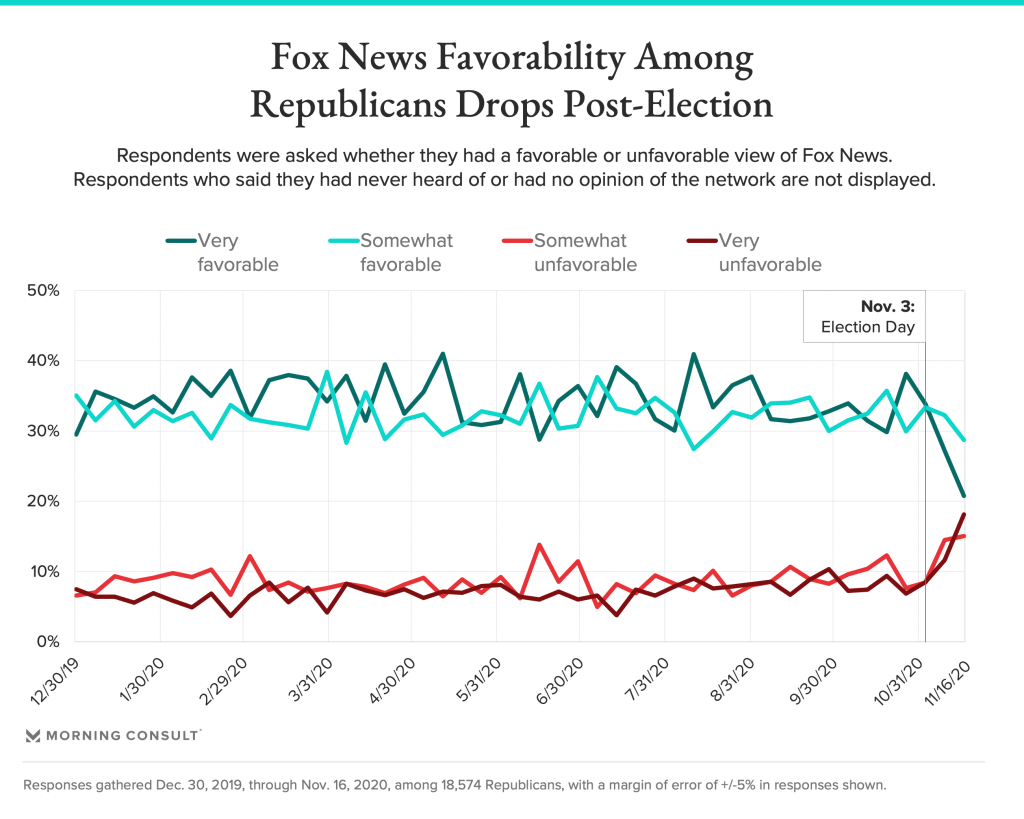 According to Economist/YouGov poll from late September, Fox News is the most-watched cable news network with registered independents and likely voters. Among registered independents, Fox News has a +7% advantage over CNN and +23% edge over MSNBC. Additionally, heading into the election, 39% of likely voters said they relied on Fox News for news and information, 31% watch CNN and only 13% go to MSNBC.