NEXT:CBS Is Found to Have Allowed Misconduct by 60 Minutes Executives for Decades
PREVIOUS:Scoreboard: Thursday, Dec. 6 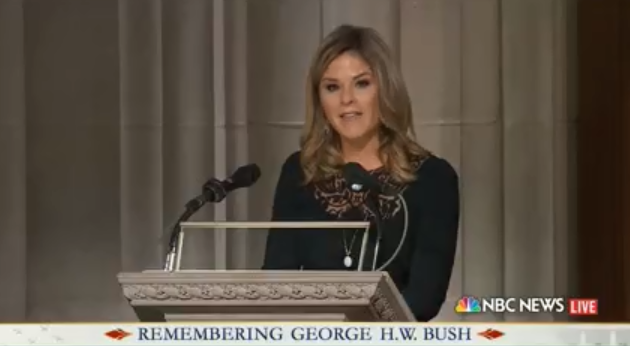 On Wednesday, NBC News was the most-watched network across broadcast and cable for coverage of the memorial services honoring the 41st President of the United States, George H.W. Bush.

NBC News correspondent Jenna Bush Hager was an integral part of the event. She delivered a heartfelt tribute to her late grandfather during the service.

Fox News, whose coverage was anchored by Bret Baier and Martha MacCallum, topped all of cable news, averaging 2.92 million total viewers and 442,000 demo viewers across its special coverage period of 9 a.m. – 1:43 p.m. ET.

MSNBC’s and CNN’s special coverage of the event lasted longer than that of Fox News’, per Nielsen data. (9 a.m. – 2:30 p.m. ET). Per below, MSNBC outperformed CNN among total viewers, however, the latter outperformed the former among adults 25-54.