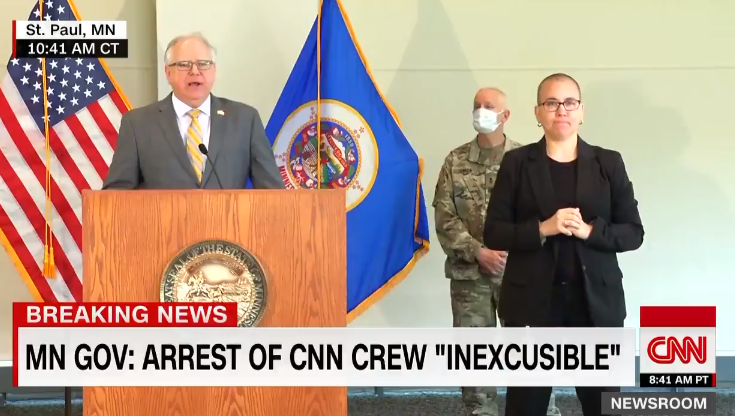 Gov. Walz was heartfelt in his apology, calling what transpired “inexcusable” and “unacceptable,” adding that he spoke with CNN president Jeff Zucker not long after arrest happened. “I take full responsibility,” said Gov. Walz. “There is absolutely no reason something like this should happen.”

“Calls were made immediately. This is a very public apology to that team, and it should not happen. I want to be very clear to those listening: I think our Minnesota reporters know this—I am a teacher by trade and I have spent my time as governor highlighting the need to be as transparent as possible and to have the press here. I failed you last night in that. It does not escape me that we are here on the catalyst that lit this spark by what happened with a police detainment of George Floyd and the idea that a reporter would have been taken while another police action was in play was inexcusable.”

Minnesota Gov. Tim Walz on arrest of CNN crew: “There is absolutely no reason something like this should happen. Calls were made immediately. This is a very public apology to that team….I failed you last night.” pic.twitter.com/6ZnZiVTlax

We accept @GovTimWalz’s apology & appreciate the sincerity of his words about the arrest of our crew this morning. As journalists, the First Amendment gives us not only the right but also the responsibility to shine light in darkness and hold those in power to account.

With that in mind, we will move forward and continue our work in Minneapolis and everywhere else where stories need to be told.