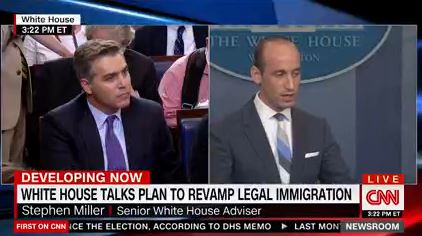 And it got quite heated when CNN’s Jim Acosta asked whether the new plan flies in the face of those immortal words at the foot of the Statue of Liberty: “Give me your tired, your poor, Your huddled masses yearning to breathe free,” goes the Emma Lazarus poem.

But the conversation turned contentious when Miller accused Acosta, the son of a Cuban immigrant, of ignorance and foolishness.

Acosta: This whole notion of they have to learn English before they get to the United States, are we just going to bring in people from Great Britain and Australia?

Miller: I have to say, I am shocked at your statement that you think that only people from Great Britain and Australia would know English. It reveals your cosmopolitan bias to a shocking degree that in your mind — this is an amazing moment. That you think only people from Great Britain or Australia would speak English is so insulting to millions of hardworking immigrants who do speak English from all over the world. Have you honestly never met an immigrant from another country who speaks English outside of Great Britain and Australia?

Acosta: It sounds like you’re trying to engineer the racial and ethnic flow of people into this country.

Miller: Jim, that is one of the most outrageous, insulting, ignorant and foolish things you’ve ever said.