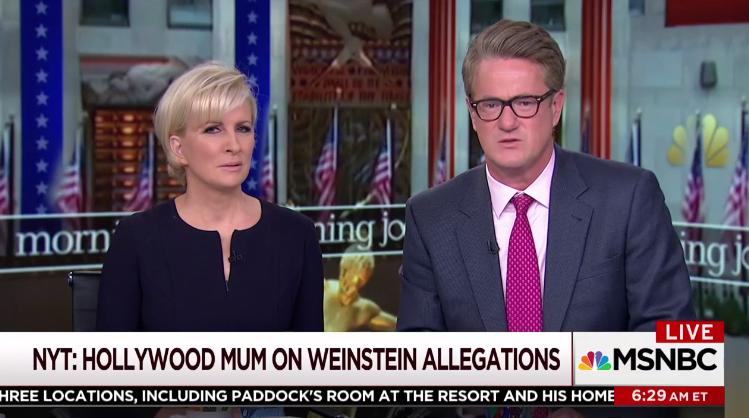 Not only were they obviously angry with Weinstein, but they were also unhappy with the reactions (or lack thereof) of Hollywood stars and prominent Democrats to the news.

“[Hollywood] is transfixed. They are all saying behind the scenes, this guy is a sleazebag. He deserves it. He had it coming and yet nobody will say a word,” said Scarborough. “The silence is deafening. The president [Barack Obama] who he’s personal friends with, said nothing.”

Brzezinski was even more disappointed in Democrats, particularly Hillary Clinton and former Pres. Obama, both of whom had received significant donations from the producer in the past. Weinstein is a well-known donor to the Democratic party.

“Where is Hillary Clinton? Where are the Democrats who took money from him? They’re just returning it and giving it to the DNC?” the TV newser asked. “Can you imagine the women we haven’t heard about?”

Frequent Morning Joe panelist and economic contributor Steve Rattner had particularly interesting insight into the matter. He has known Weinstein for decades and was in his wedding.

“I’m in a slightly awkward position here, because while I don’t disagree with anything you’re saying about Harvey, Harvey’s been a friend of mine for 20 years and an incredibly loyal friend. And has never done anything untoward toward me — I don’t mean sexually — but in general,” said Rattner. “So, I condemn what he’s done, it is appalling, in fact Harvey has said it’s appalling.”

Brzezinski had released a statement over the weekend saying that she would not be participating in a three-book deal with Hachette, the publishing company owned by Weinstein. She stood by that stance this morning:

I said I would not do the book deal unless he did. I have to say, though, I want more. I want to know that this company does not embrace sexual abusers, sexual harassers.

And I want to have a conversation with them before I move forward, because this is step one. Step two is having a wider conversation about the culture within an organization. That, of course, starts at the top.

Here are her tweets from the weekend:

I have a three-book deal with Weinstein Books, through Hachette. I can’t go forward with those books unless Harvey resigns.

Authors, actors, and moviemakers should not work for any Weinstein company until he resigns. Not a close call. #knowyourvalue

Harvey Weinstein needs to resign from his companies, face his sickness, and go into a long, self-imposed exile. https://t.co/uq5xJieKjc