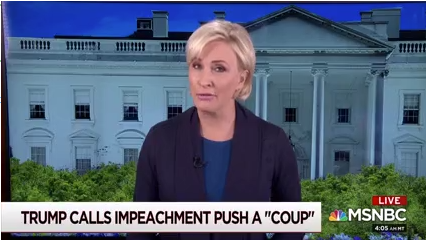 Three women, at various points of Tom Brokaw‘s legendary 50-year career in TV news, have alleged he made unwanted advances on them.

One of those women to level accusations at Brokaw is former NBC News and Fox News anchor Linda Vester, who is now saying that Morning Joe co-host Mika Brzezinski told her in person that she believed her account of misconduct.

Vester told Fox News the saga began when she and Brzezinski coincidentally jogged by each other near their respective suburban New York homes.

“We knew each other. I saw her, she said, ‘Hey,’ and then I slowed down and I said, ‘So, I just have to ask you, why did you sign that letter?’ And she went off on me in a way that was so shocking,” Vester said, adding that Brzezinski then “started yelling at me, saying Tom Brokaw is an old man and he probably wouldn’t survive” and “thought I was being a little too cute and that she didn’t believe that I had done enough to fend him off.”

“I said, ‘Mika, you have said that you were a victim of sexual assault, right?’ She said, ‘Yes.’ I said, ‘Was there a power differential involved in your case?’ She goes, ‘Yes,’” Vester continued. “I said, ‘Then I think you know exactly what I’m talking about.’”

According to Fox News, Vester went on to note that Brzezinski’s husband and co-host Joe Scarborough then stepped out of the house and Brzezinski eventually “settled down, and we talked some more and she finally said, ‘I believe you, I believe your account.’”

Brzezinski tells Fox News that the story is false, “I am saddened that a personal conversation between two working mothers was so twisted out of context, and that my personal text expressing sympathy for Linda’s problems at multiple networks was screenshot and sent to a competitor in an attempt to discredit me. The story is false.”

Brzezinski was one of 139 women who signed a letter in 2018 which did not dispute the sexual misconduct claims made by Vester, but rather, expressed how Brokaw had “given each of us opportunities for advancement and championed our successes throughout our careers.”

“We all signed the letter knowing that more women could come forward. If more women come forward we’re going to revisit this,” one person told Savannah Guthrie at the time. Hoda Kotb, Guthrie and Kate Snow did not sign it as they are were all covering the story in spring 2018, and the ongoing #metoo movement.

Brokaw continues to deny the sexual misconduct accusations being made against him.