While morning news shows, both on cable and broadcast, have experienced talent and format changes over time, MSNBC’s Morning Joe has maintained a rare degree of consistency. Tomorrow Mika Brzezinski and Joe Scarborough will celebrate 10 years of Morning Joe even as the show continues to deliver in the ratings.

First an on-air duo, Brzezinski and Scarborough are now also an off-air couple whose engagement earlier this year led to this Saturday Night Live skit.

So, do they see hosting Morning Joe for another 10 years?

“I’ll answer this one,” said Scarborough during an interview with TVNewser this morning. “Mika is a TV person, and I…”

Before Scarborough could finish his sentence, Brzezinski did it for him: “We would be blessed and honored to host Morning Joe for another year, and we are both so lucky. We both would be so blessed.”

TVNewser: Do you recall the moment when you two realized you clicked and could host a show together?

Brzezinski: I could tell five minutes into the show. Joe was really excited about putting the show on the air. He went to [MSNBC president] Phil Griffin with a power point presentation. He chose his co-host. We got on the air, and he started feeling nervous. I had been in TV for a long time, and I had done every kind of show that literally exists in TV news, magazines, morning shows, evening news, early shows, late shows, overnight shows, weekend shows. I knew the tone and tenor of every type of TV program, and all of them have a formula and all of them are tired. I realized within five minutes that this was new, it was unpredictable, and it was like nothing ever seen before on TV. Morning Joe has an unpredictability to it that has lasted.

Scarborough: Mika, in fact, told friends later that she would never do a morning show again after being on the night shift for five, 10 years. And then five minutes into the show she said to herself: “Damn, I’m going to be stuck on this show for a very long time.” Me, I really had no idea. At the time, I was sort of swimming as fast as I could to stay above the water. I didn’t really know if they were ever going to give us this show or not. Mika knew five minutes in, and I remember she told me: “This is going to be big, get ready.” I didn’t believe her. I didn’t even know her. I thought it was a strange thing for her to say right off the bat. She was right. 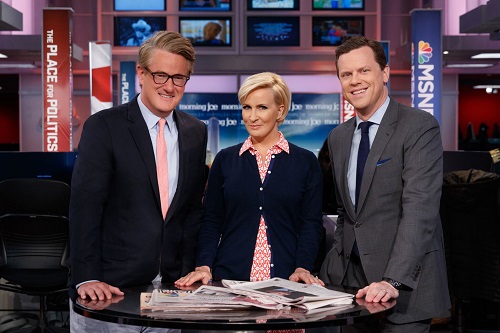 TVNewser: Mika spoke about the unpredictable nature of the show, so I’m interested in knowing what you think of others who have tried to copy the Morning Joe format.

Scarborough: Well I don’t think anybody can really do it because it requires that you have three hosts, Willie [Geist], Mika, myself, who can talk for three hours without teleprompters. The only person who was able to do that successfully on TV is the guy who we replaced Don Imus. Nobody else can do it, everybody else seems, for the most part, chained to a teleprompter. As far as news goes, you can see it. People are reading teleprompters 90 percent of the time, and we just don’t do that. People have talked about CBS This Morning trying to do that, but they really don’t.

Brzezinski: I really haven’t seen any shows that imitate us. In terms of CBS This Morning they’re locked into local affiliates. Joe and I considered going there at one point, and one of the reasons why we didn’t was because there were too many constraints for a real, freewheeling conversation that could last more than five minutes. It’s (CBS This Morning) a great show, and there are a lot of great shows on television, but I just haven’t seen any shows really imitate us.

TVNewser: Can you speak about the platform Morning Joe has given you both in terms of your respective brands? Mika – Your notable book and public speaking career, and Joe, your music?

Scarborough: Well, I mean the music career is a radical one-off that doesn’t really flow naturally from the TV brand. But there’s certainly no doubt that our brand has been built over the past 10 years in ways that we never really expected. But I think Know Your Value actually does feed out of the show really naturally.

Brzezinski: It does. The story of how I learned what my value was and how to communicate it effectively is the basis of the book, and that it revolves around our show. The book touched such a nerve with so many women and still sells today that I’m actually re-releasing it in the spring, and starting a whole new round in partnership with NBC and Comcast not only in terms of events, which I will be announcing this week with some really interesting partners, but we will also be doing a website. I travel the country talking to women about the Know Your Value message and I am building a brand that has been a direct offshoot of this incredible platform that has been Morning Joe.

TVNewser: One moment that has stood out to you over the years…

Scarborough: I think the favorite moment for me was one that helped our show really take a big step forward in the eyes of a lot of leaders in Washington, and that’s when [the late Meet the Press moderator] Tim Russert decided to walk over in 2008 from the main civic center in Des Moines to this little coffee shop called “Java Joes” where we set up because they wouldn’t give us a spot in the civic center. He came in out of the snow and asked if he could be on our show. We said: “Sure, Tim, of course.” Tim was such a legend and it was a turning point for us.

Brzezinski: For me, my favorite moment is any moment that my father appeared on Morning Joe.