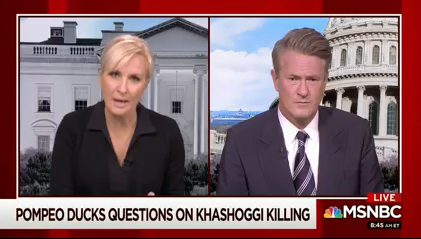 MSNBC is having to deal with another one of its hosts making homophobic remarks.

This one came on live television.

“Joe, I have to ask…I can’t think of anyone who can put it more clearly than you. I understand that Donald Trump doesn’t care. He doesn’t care. But why doesn’t Mike Pompeo care right now? Are the pathetic deflections that we just heard when he appeared on Fox & Friends – is that a patriot speaking?” Brzezinski asked during this morning’s broadcast. “Or a wannabe dictator’s butt boy?”

The remark was made in reference to an interview on Fox & Friends earlier in the morning where the Sec. of State deflected when asked about how the administration planned to deal with Saudi Arabia in the wake of journalist Jamal Khashoggi‘s murder. Pompeo said the CIA concluded that reports stating Saudi prince Mohammad Bin Salman ordered the murder of Khashoggi as being “inaccurate.” (For whatever it’s worth, Scarborough complimented the F&F trio for its questioning of Pompeo).

Totally agree with you -SUPER BAD choice of words .. I should have said “water boy”… like for football teams or something like that.. apologize to @SenatorDurbin too! SO SORRY! https://t.co/zIqsGdK3Tk

An on-air personality from a competing morning show chimed in:

As previously mentioned, this isn’t the first time MSNBC has to deal with one of its on-air hosts making homophobic remarks.

Last December, Joy Reid came under fire when social media posts and remarks on her blog from 10 years ago which contained anti-gay remarks were discovered.

Reid wrote homophobic content about former Florida Gov. Charlie Crist on her personal blog, The Reid Report, referring to the former governor as “Miss Charlie,” and wrote that if he ever got to the White House as John McCain’s vp, he would be working on “designing pretty napkin patterns at state funerals,” and spend his honeymoon “oogling male waiters.”

Reid also wrote about how “homosexual men found “homosexual sex” to be “gross,” and claimed that the sight of two men kissing makes “makes most straight people cringe.”

She later apologized for those posts.

In late April on her MSNBC show AM Joy, Reid apologized for more homophobic blog posts that were uncovered. Her apology came three days after claiming someone hacked the decade-old posts, but forensic experts she hired could not determine anything was hacked. She also claimed the FBI was conducting an investigation into what had happened.