NEXT:Sunday Show Ratings: Q4 2017
PREVIOUS:Brian Ross Is Returning to ABC, but Will Serve in Different Role 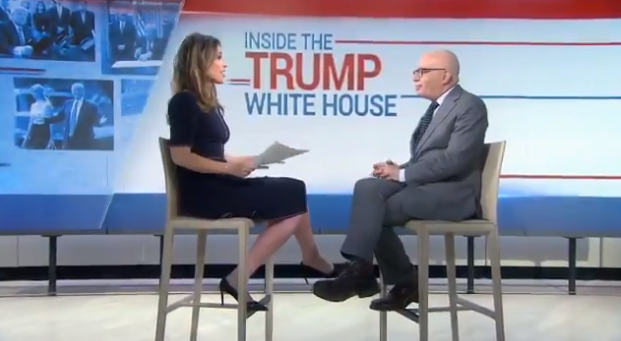 Journalist Michael Wolff kicked off a media tour for his explosive new book on the Trump administration, Fire and Fury: Inside the Trump White House, with a sit-down on the Today Show with Savannah Guthrie.

The book was supposed to hit bookstores Monday, but the publication date has been moved up to Friday, Jan. 5 at 9 a.m. ET.

Before getting into the book itself, Guthrie addressed the news that President Trump’s lawyers sent an 11-page cease and desist letter to Wolff and the publisher of Fire and Fury, Henry Holt & Co.

Wolff responded by saying it was odd the letter was sent before they even read the book, and remarked, “Where do I send a box of chocolates?” (meaning Wolff believes the move helps to sell more books).

“He is helping me prove the point of the book. It is extraordinary that the president of the United States would try and stop the publication of the book. This didn’t happen with other presidents, nor would it happen with the CEO of a midsize company.”

I authorized Zero access to White House (actually turned him down many times) for author of phony book! I never spoke to him for book. Full of lies, misrepresentations and sources that don’t exist. Look at this guy’s past and watch what happens to him and Sloppy Steve!

“I absolutely spoke to the president. Whether he realized it was an interview, or not, I don’t know, but it certainly was not off-the-record.”

“Did you speak to him at the White House, after he was sworn in?” asked Guthrie.

“One of the things we have to count on is Donald Trump will to attack,” Wolff continued. “He will send lawyers letters. This is a 35-year history of how he operates.”

When asked, Wolff said that he indeed did have recordings, notes, and is comfortable with everything he has reported.

“You stand by everything in the book … Nothing made up?” asked Guthrie.

“Nothing made up,” responded Wolff.

He later stated that “100 percent” of the people around Trump question his intelligence and fitness for office, including former White House chief strategist Steve Bannon who “evolved” and ultimately came to the conclusion that Trump is unfit to fulfill his job as president.

Wolff also noted Trump’s senior officials say he’s a “moron, an idiot. Actually, there’s a competition to get to the bottom line here of who this man is. Let’s remember, this man does not read, does not listen. So he’s like a pinball just shooting off the sides.”

The one thing they have in common, he said, is that they all compare him to a child: “He has a need for immediate gratification, it’s all about him.”

Admitting that he flattered his way into getting the unprecedented access, Wolff later told Guthrie, “I certainly said whatever I needed to get the story.”

(Full disclosure: Wolff had a year-long stint as Adweek editorial director from 2010 to October 2011).