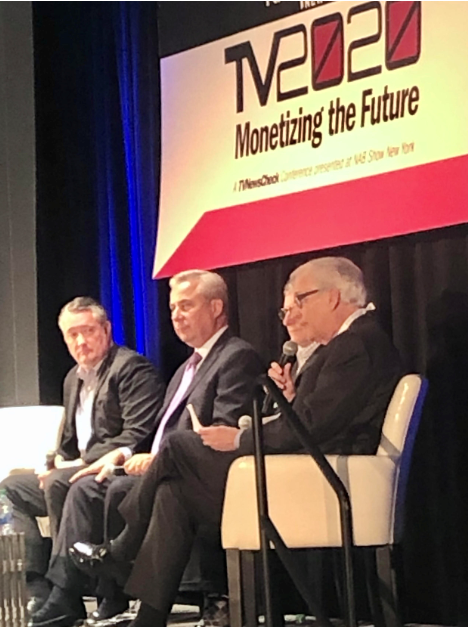 One of the more compelling sessions at this year’s NAB Show – New York featured a trio of local station group chief executives.

The presidents were asked about potential for mergers and acquisitions, and according to Meredith Corp. Local Media president Pat McCreery, Meredith is in buy mode.

“We are a buyer. I did dress up in case we got any offers today,” said McCreery. “We’re not new, and we’re not sexy, but we’re profitable.”

McCreery added: “There’s probably more outside money coming in. I’m the only guy up here who hasn’t bought anything recently, and we’d like to, but that becomes harder and harder in the space.”

Nexstar Media chief and co-founder Perry Sook, whose company had a monumental year with a $6.4 billion purchase of Tribune (which includes its debt), feels there will be more M&A in the future, but noted there are just fewer companies to buy. “We [Nexstar Media] now have 13,000 employees, 5,400 journalists, more than any other news organization in the U.S., scores of ad sales executives,” said Sook. “M&A is not easy. It takes social issues, diligence, regulatory concerns. It’s complicated. It takes time. Believe me, I’d know!”

When asked what Wall Street doesn’t get about local broadcast television, McCreery conceded that he wasn’t entirely sure.

“I’m not sure I understand what they don’t get about it because I see the bottom line every day, and I know it’s a great business,” he said. “When it comes to Meredith specifically, I think our issues are more on the publishing side of the business as we continue to try and swallow the Time Inc. acquisition. That’s very specific to us because we’re not necessarily a standalone broadcaster for our stock purposes.”

Sook doesn’t feel that local broadcast industry is struggling. He said his company’s stock is +25% year-to-date.

“I don’t think that sounds like a business and distress,” said Sook, whose company now owns more local stations than any other U.S. broadcaster. “However, we trade at an incredibly cheap multiple of our free cash flow, which is of consternation to those of us on the management team. Drew Marcus –who was an analyst and investor and now works as an investment banker in this business– has said that your stock prices are determined on any given day: 50% by what’s going on in the market, 25% by what’s going on in your industry, and 25% based on what you do. That was his way of saying,’things are never as good as bad you think they are and they’re never as bad as you think they are,’ but the vast majority of the determinant of your stock price is out of your control.'”

Sook added: “These are cyclical businesses, and I would bet if we were sitting here at this time next year, we’d be talking a different story in terms of where the stock price was relative to the S&P or other sectors.”

“At the end of the day, and I hear rumblings that people are concerned about ad sales side of business, but it’s actually been an better year on the ad sales side of the business than I expected,” said LaPlatney. “There are challenges, and most of the challenges revolve around making our core product linear TV, taking the friction out of the buying process, and adding data capabilities there. Once we do that, we’ll have very broad reach locally and with those targeting tools, I would expect local and national kick off from there.”

When asked if any new local advertiser categories are emerging, all three noted that legal is becoming a significant category. McCreery said that the legal category was actually approaching automative in local ad spent. Auto has long been the dominant player in local television advertising. The auto sector that has declined in recent years.

McCreery predicted that Cannabis would become a big local TV advertiser, a line which for some reason elicited laughs from the audience.

Neither LaPlatney nor Sook disagreed with McCreery’s prediction. Sook said that Nexstar stations have been approached by Cannabis sector, but have yet to accept their local TV advertising pitches. That could change, however, if it becomes legalized in additional states and markets.