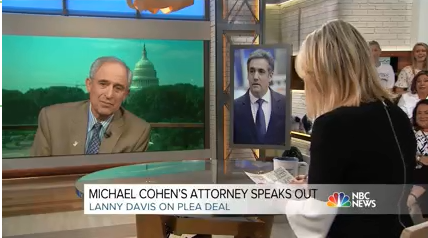 Lanny Davis–the attorney for President Trump’s former attorney and “fixer,” Michael Cohen–has been making the rounds across TV and radio news programming over the past 12-18 hours. This comes the day after his client implicated President Trump in a federal crime as he pleaded guilty to campaign-finance violations, among a variety of charges.

One of the shows Davis has appeared on is Megyn Kelly Today, and during the 9-minute remote interview with the host earlier today, Davis made a direct appeal to Kelly’s viewers to donate to Cohen so that he can “continue to tell the truth” about President Trump.

Davis: Could I take one opportunity to remind everyone that Michael Cohen has suffered a tragic and difficult experience with his family. He’s without resources and we’ve set up a website called Michaelcohentruth.com that we’re hoping that he will get some help from the American people so he can continue to tell the truth.

Apparently Kelly’s studio audience wasn’t buying the plea for money. Or maybe they didn’t like that he was promoting the website, because after he made the comment, a mixture of laughs and boos were audible in the studio, as you’ll note when playing the video below.

Kelly: The audience, I don’t know if they are ready to donate, Lanny. We did check before we went on air. It’s got $70,000 in it so far…We appreciate you coming on.