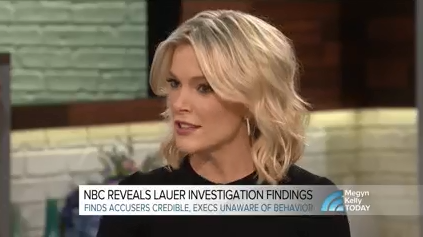 Megyn Kelly used the first 5 minutes of her 9 a.m. Today show hour by addressing NBC’s findings from the 5-month-long Matt Lauer investigation. Kelly was joined by NBC News correspondent Stephanie Gosk, who has been reporting on stories of sexual harassment over time, and asked Gosk what the company’s internal investigation found:

Gosk: This investigation started early on. It was led by the NBC Universal general counsel. She, along with a team of people, all with the exception of one, interviewed 68 people, including current management here at NBC in leadership, as well as former and current staff at the Today show. Their major conclusions are the following: The first and most important is that they concluded that NBC leadership and Today show leadership did not receive any complaints about Matt Lauer prior to November 27th, 2017. As you may remember, it is when a woman came forward and accused Matt Lauer of inappropriate sexual behavior. He was fired within 24 hours. Following that, three more women came forward and said they were sexually harassed. this report finds their stories credible.” 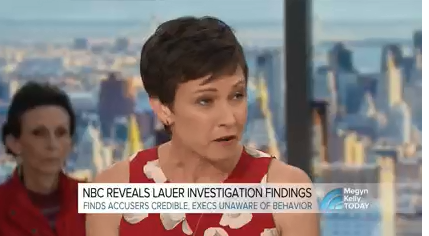 Kelly then talked about how a number of people outside of the company have had negative reactions to the report, specifically mentioning the group Press Forward, which advocates for journalists. Gosk disclosed that she is on the initiative’s board of advisers and spoke about how the group stated that it wants “an independent internal investigation for this to be credible,” because the group feels there is conflict of interest when management reviews itself. Gosk then went on to credit NBCU general counsel Kim Harris, saying she’s “incredibly qualified for this job…she has been in the White House and has investigated these kinds of things. In fact, if you were to cherry pick someone, you might cherry pick her.”

Kelly noted that “companies like to keep these things in-house so they don’t spin out of control, even though women inside and outside of the company would prefer to have an independent investigation.”

Kelly then read Matt Lauer‘s statement aloud: “There are aspects of the NBC report with which I clearly disagree…I took responsibility for those relationships, and apologized to the people I hurt,” then moved on to other topics. 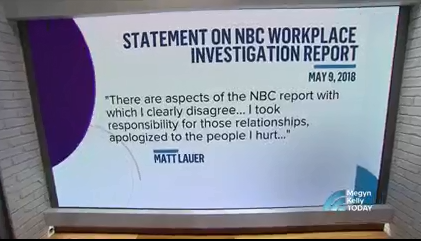