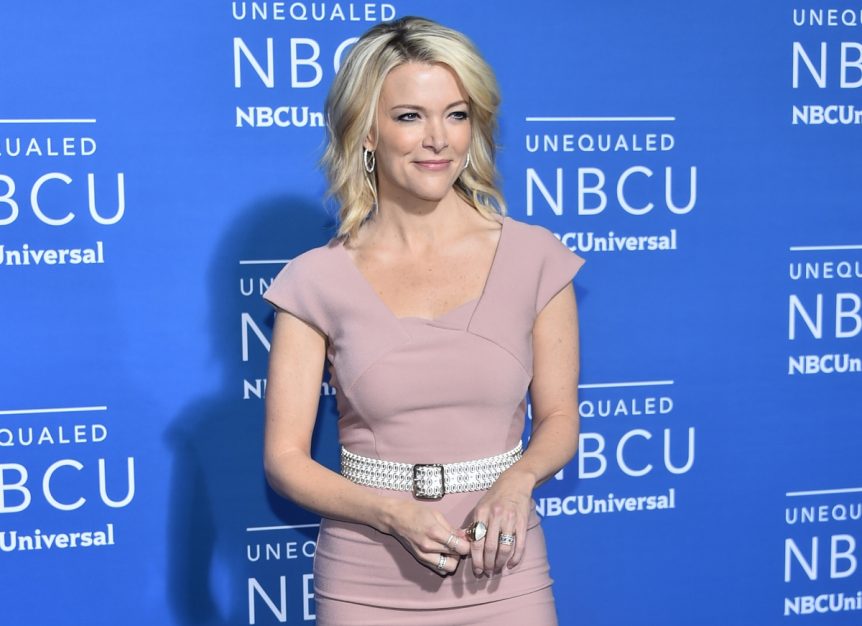 Megyn Kelly returns to TV news this weekend with the debut of Sunday Night with Megyn Kelly, a news magazine built around the former Fox News star who left the network earlier this year, only to sit on the contractually-obligated sidelines until joining NBC News earlier this month.

“I’m back to that feeling I used to have when I first started in journalism, where I felt that I would do this job for free. I would absolutely do it for free,” said Kelly, who will be one of NBC’s highest paid employees with an annual salary in the double-digit millions.

Here, we talk with Kelly about her new show, her old network, and her time away from TV news including the non-stop coverage of Pres. Trump (she became a focal point during the run of candidate Trump.) “When I was in the mix myself on cable having to do a live show every night, I was neck-deep in the details of every news story. I would say from the 30,000 foot perspective that I’ve been cruising at, it’s been easier to see the basis for his complaints about the media, and it’s also been easier to see the clear moments in which he’s brought it upon himself.”

TVN: How are you feeling right now about Sunday Night with Megyn Kelly? What should we expect?

Kelly: Well in general, I’m feeling great. I’m feeling happy. It’s a new balance in my life where when I was at Fox working in prime time I was not seeing enough of my children. And then I was off for 4 months, and I was not tapping into that piece of me that needs to work. So it’s great to be back and striking that balance. For me, you just notice it in the way you walk around, the way you carry yourself and your interactions with people. I joke with my husband Doug, “What is this feeling? Oh yes, happiness!”

The show is going to be longer-form journalism, with big interviews and investigations. We’re going to take viewers to places they’ve never been, and we’re going to do it with heart and with humility. I think people will go on an emotional journey. I think they’re going to learn things that will be rather explosive. They may feel outrage at times, but they’re also going to feel inspired, and I know they’re going to have the chills, and tears, because I’ve experienced that already in the interviews that we have shot.

TVNewser: You’re leaving for Russia shortly to moderate a panel with Vladimir Putin. If you’re able to sit down one-on-one with him, what’s one question you would ask?

Kelly:  Well, I can’t tell you something specific because then you’re going to put it in TVNewser! I’m moderating SPIEF (St. Petersburg International Economic Forum), and always, in the history of that event, the moderator gets to ask Mr. Putin direct questions for about 20 minutes or so. I’ll get that opportunity. Granted, it’s not the same as a one-on-one interview, which of course we’re hopeful about. But that’s the one thing I’ll know I’ll be doing at SPIEF. But I’ll of course ask him about our election, the allegations of interference and collusion. (Portions of the conversation are planned to air on Sunday’s debut program.)

TVNewser: How will your 9 a.m. program, which launches in the fall, compare with the first two hours of the Today show?

Kelly: I think there will be some continuity there. I think it will be a sister, but not necessarily a twin sister program. I have a very clear idea of what it’s going to be in my head, and we can talk more about it as we get closer, but the Monday through Friday show is going to be a hefty, delicious dose of empowering, inspiring, informational, entertaining content. I’m really excited to work on it. We’ve already been exchanging draft rundowns, and it’s already got the wheels on the bus, so to speak, so I’m excited to get to work on that, but it has to wait because I have a different priority right now.

TVNewser: What has been the best part of being away from TV for 5 months?

Kelly Perspective. Listen, the last two years have given me a lot of perspective as well. I’m somebody who having lost my dad at a young age, I always know what’s important, and I always have known what’s important. It’s great to love your job, but what’s important is not your job. So I’ve had that perspective my whole life, and I would say the past two years have underscored that. And then in terms of time off – A lot of people have asked me: “Oh, are you so sorry you’re not on the air reporting on all of this drama?” My answer has uniformly been: “No, I am not sorry, not at all!” It’s been nice to be away from the madness, and it’s been illuminating to see how people cover President Trump when you’re not in the mix yourself. When I was in the mix myself on cable having to do a live show every night, I was neck-deep in the details of every news story. I would say from the 30,000 foot perspective that I’ve been cruising at, it’s been easier to see the basis for his complaints about the media, and it’s also been easier to see the clear moments in which he’s brought it upon himself.

TVNewser: Do you have any thoughts on the passing of your former boss Roger Ailes?

Kelly: I don’t want to make any public comment on that other than to say that I detailed our relationship, the good and the bad, in my book which I thought was fair because I wanted people to have the full measure of the man. I said what I wanted to say about him there.