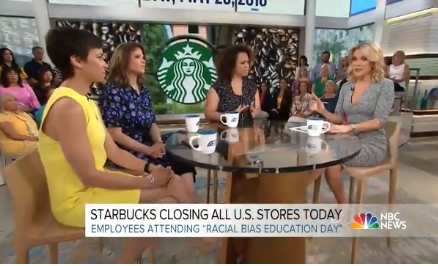 Megyn Kelly isn’t a fan of Starbucks new policy allowing people who don’t purchase products to use the restroom, a story she led with on her program today.

“They’re allowing anyone to stay and use the bathroom even if they don’t buy anything, which has a lot of Starbucks customers saying, ‘Really?’” Kelly said during a conversation with NBC News correspondents Stephanie Gosk and Jenna Bush Hager, and conservative host of PBS’s In Principle Amy Holmes. “Now the Starbucks are going to get overwhelmed with people and is it really just a public space or is it not?”

The company’s move comes in light of an incident at a Starbucks in Philadelphia in April where the store’s manager called police on two African-American men who were waiting for a friend. The manager complained the two men hadn’t bought anything, and employees also refused to allow one of the men to use the restroom. The manager ended up calling the police, and arrested the duo for trespassing; but they were later let go without charges.

Starbucks apologized to the victims, who also received a financial settlement, and the company, led by Starbucks executive chairman Howard Schultz, is closing more than 8,000 locations across the country this afternoon for “racial bias education” for roughly 180,000 staffers across the nation.

Kelly seemed to concede that the men probably shouldn’t have been arrested, and didn’t necessarily have a problem with the anti-bias training itself. But she isn’t a fan of the new policy.

Holmes agreed, saying “Starbucks may becoming a magnet for people who want to exploit and take advantage of this new policy.”

“It’s not so much the afternoon of training, it’s Starbucks making a statement about how they want to treat their customers moving forward.” @realamyholmes on the new #Starbucks open door policy. pic.twitter.com/x6RuynQPxj

Bush Hager disagreed, saying “some of these people don’t have places to go…Of course it’s not a solution, but it’s also compassionate, it’s also showing kindness to people who may not have that,” a comment which garnered applause from the in-studio audience.

Kelly responded by saying, “I don’t know, I mean there are places in New York City that are good about providing churches for the homeless to go, and it’s a question of whether a commercial establishment is that place for the paying customers that go in with their kids.” Kelly continued,” but do you want to deal with a mass of homeless people or whoever is in there? They could be drug-addicted…You don’t know.“

The training will include Common, a figure not beloved by Kelly, going back to her Fox News days. Back in 2011, a number of Fox Newsers, hosts and contributors alike, spent days leveling on-air criticisms at First Lady Michelle Obama for inviting the rapper, actor and social justice activist to the White House to perform poetry.

“Apparently one of the people they’re using to instruct on the bias is Common, the rapper,” said Kelly. “This is a guy who has been accused of homophobic lyrics, talking about guys shouldn’t come near me, and referring to women as hoes, bitches and sluts. Saying women should be part of the stable of his lyrics…if we’re going to hold up somebody to teach on bias, maybe we should be sensitive to that person’s entire record.”

Common was on Good Morning America this morning to talk about this afternoon’s training (and promote his role in the new movie The Tale).

Schultz sat down with the CBS This Morning trio to discuss this afternoon’s training. Schultz had previously sat down with Gayle King right after the incident had happened, in the same store where it happened.

“I think we’re living in a time in America where there is a fracturing of humanity… This is probably one of the most important transformational moments in the history of our company” — @Starbucks‘ Howard Schultz ahead of today’s racial-bias training pic.twitter.com/PTQk8yNoSh