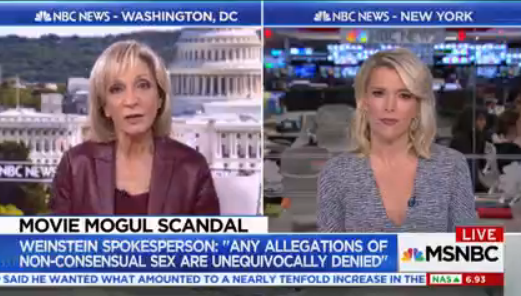 Few TV newsers are more qualified to provide their insights on this subject than Kelly.

“When we hear each other come out with these stories, we feel empowered in our own right to tell our own stories because women, I think too often, and it can happen with men, too, they blame themselves,” Kelly told Mitchell. “They think, I should have tried harder to get out of there, I should have done something.”

Kelly briefly addressed her history with Fox News during the discussion, “Obviously I’m new over here in the NBC family and I come from Fox News and Fox News’ problems on this front have been well documented and well publicized, but it isn’t just Fox, either,” she said. “I hope our own industry looks at itself and does a cleaning of house and gets honest about anybody in their companies who they’ve had to pay out repeated settlements for because at this point if that gets unearthed, if there is such an executive at these other companies, it’s on you.”

Kelly told us last month she didn’t see herself appearing on MSNBC prime time and promoting her program on the channel (Mitchell did at the end of the segment), but these are unique times.