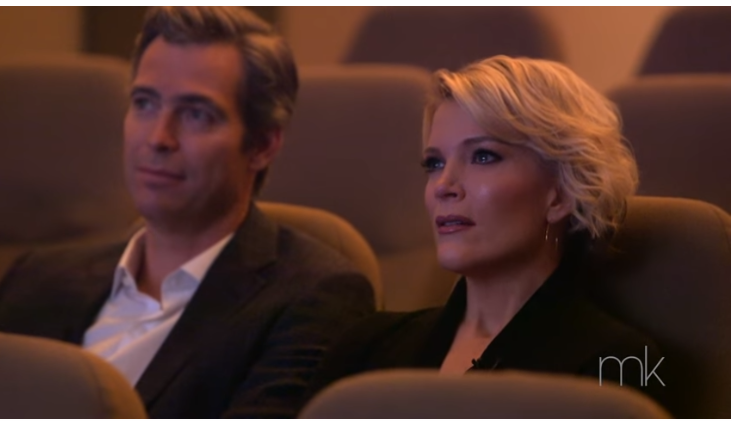 Megyn Kelly said on Dec. 13 that she would be responding to Bombshell, the movie about sexual harassment at Fox News, in the near future.

It appears that time has come.

Kelly is releasing a response to the movie today, a movie featuring stars like Nicole Kidman, Margot Robbie, Charlize Theron, and many more. It’s directed by Jay Roach, was nominated for 2 Golden Globes (though it didn’t manage to win any) and is being nominated for multiple SAG awards.

Kelly watched a screening of the film back in December with a few of her old FNC colleagues who lived the experience: Juliet Huddy, Rudi Bakhtiar, Julie Zann. Kelly’s husband Doug Brunt watched as well.

Neither Ruddy nor Bakhtiar has worked in television news since.

Kelly’s video showed the women tearing up while they were watching Bombshell. Kelly, with Brunt seated next to her, was shown tearing up as well.

After the screening was done, the quintet gathered to talk about what they had seen and the women offered emotional responses as they talked about Ailes’ conduct and how he seemingly suppressed all complaints about sexual harassment while running the No. 1 cable news network.

Kelly later asked her former colleagues if they had to do “the infamous spin” which has also been referred to as “the twirl” (we’ll let you come to your own conclusions as to what that exactly entails) while communicating one-on-one with Ailes in his office.

Below, a 3-minute tease. According to Kelly, she’ll post a more in-depth response at 4 p.m. ET. If interested, it can be seen on her IG TV page.

On her Instagram account, Kelly re-iterated that she did not produce, consult on, or have anything to do with the film. She said neither she nor the women she watched it with sold the rights to their respective stories (or in Kelly’s case, her book), and said it was pretty unsettling to see a version of what they experiences, as told by strangers.

I have no connection to the movie “Bombshell,” other than I lived it. I did not produce, consult on, or have anything to do with the film. Neither I nor the women I watched it with sold the rights to our stories (or in my case, my book), so it was somewhat jarring to see a version of our experiences told by strangers. I watched the movie with some of my friends who, like me, were sexually harassed while at Fox News. We talked about it afterward in what proved to be an emotional, raw, revealing discussion of what the filmmakers got right, wrong, and what really happened to us those years ago. The full video hits today, right here on my IG TV page, at 4pm.