NEXT:Trump to ESPN: 'Apologize for Untruth!'
PREVIOUS:Fox News, The Weather Channel Were the 2 Most-Watched Cable Nets of the Week 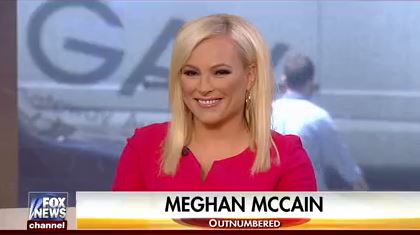 The presidential campaign blogger-turned-TV-host was a panelist on the Fox News afternoon program Outnumbered.

She’s been off the show since her father, Arizona Sen. John McCain was diagnosed with an aggressive form of brain cancer. But while he has returned to work in the Senate, she had not yet returned to Fox. (We asked Fox News about her status last week, but were not given an answer.)

I’m so thankful to @FoxNews for the chance to be on @OutnumberedFNC but I’m leaving to focus on other things, I have no doubt the show will

– continue to do well and wish all my friends and colleagues at the network nothing but success.

McCain’s exit comes as Laura Ingraham is set to expand her presence at Fox News with a new prime time show. McCain and Ingraham have had a contentious relationship in the past, as she told us in an interview last fall.