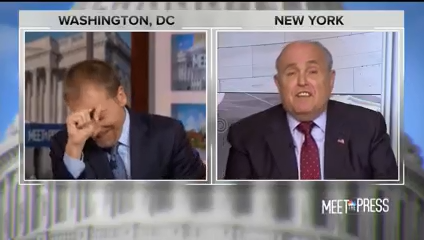 The NBC Sunday show won its ninth straight broadcast across the board—its best streak in almost seven years (since Sept. 18, 2011)—by delivering nearly 3.5 million total viewers, +34 percent more than ABC. Meet the Press was the only Sunday show to deliver more than 3 million viewers.

For the second consecutive week, MTP was able to post viewership growth versus the comparable Sunday in 2017 (+7 percent).

MTP also dominated the demo most valued by news advertisers, A25-54, winning its 31st consecutive broadcast in the category. That said, the program was -5 percent among adults 25-54 vs. the same Sunday last year.

Giuliani: “I am not going to be rushed into having him testify so that he gets trapped into perjury. And when you tell me that, you know, he should testify because he’s going to tell the truth and he shouldn’t worry, well that’s so silly because it’s somebody’s version of the truth. Not the truth.”

Giuliani: “No, it isn’t truth. Truth isn’t truth. … Donald Trump says I didn’t talk about Flynn with Comey. Comey says you did talk about it, so tell me what the truth is.”

ABC’s This Week with George Stephanopoulos posted audience declines, both in total viewers (-7 percent) and the A25-54 demo (-28 percent).

CBS News decided to retitle Face the Nation with Margaret Brennan this past Sunday. According to a source, the show actually delivered its largest audience in four weeks.