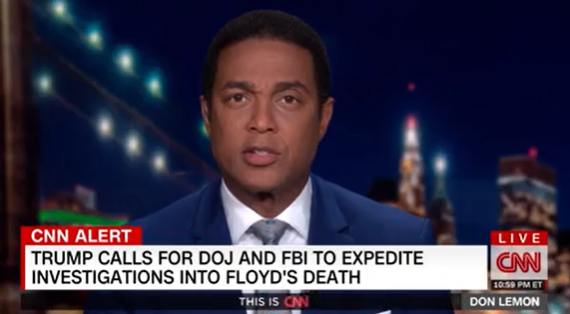 A destination for breaking news, CNN just completed its best May ever, both in Total Viewers and among the key A25-54 demo. The performance was driven by wall-to-wall coverage of the Covid-19 pandemic, and more recently, breaking news coverage of the police murder of George Floyd, an event which has sparked intense protests against police brutality in cities across America.

CNN set May records in total day and prime-time, as well as in dayside (9 a.m.-4 p.m.). In fact, CNN drew more adults 25-54 in that daypart than any other basic cable network for the second consecutive month.

Among all cable networks, CNN ranked No. 3 in total day and also prime-time viewers in May.

Relative to May 2019, CNN thrived this past month. The network was +177% in total prime-time viewers, +95% in total day viewers. With breaking news luring casual news consumers to its airwaves, CNN’s year-over-year growth was even more noticeable in the demo: +151% in the prime time demo and +116% in the total demo.

The month-to-month trend, however, was less positive. Compared with its April 2020 performance, CNN was -15% in total prime-time viewership, -20% in total day viewers, -20% in the prime-time demo and -25% in the total day demo.

The network also remained in third place behind Fox News and MSNBC in Total Viewers.

The average Nielsen live + same day impressions for May 2020:

The 5 p.m. hour of The Situation Room with Wolf Blitzer had its highest viewership in May on record among total viewers and in the demo.

Lastly, Cuomo Prime Time beat 9 p.m. competitor The Rachel Maddow Show in the A25-54 demo for the second consecutive month.

CNN HAS MOST-WATCHED MAY EVER

Tapper, Blitzer, Burnett, Cooper, Cuomo and Lemon All Have Highest May on Record in Total Viewers

CNN Surpasses MSNBC in All Dayparts in the Demo 25-54

Viewers are flocking to CNN in unprecedented numbers to get the latest facts and information during this period of crisis in America. This month was CNN’s most-watched May ever in total day and in prime time among total viewers and among 25-54. In May, CNN surpassed MSNBC in total day in the demo 25-54 for the sixth straight month, and in prime time (M-Su/M-F) for the third consecutive month. During daytime (9am-4pm), CNN was #1 in all of cable and #1 in cable news for the second consecutive month among adults 25-54. This was CNN’s highest daytime in May on record among both total viewers and the demo. CNN has now outperformed MSNBC during daytime programming for the 75th consecutive month, the longest streak on record. On weekends, CNN’s programming outperformed MSNBC for 24 out of 24 hours on Saturdays and Sundays. CNN’s audience grew the most during this busy news cycle across all dayparts and programs by far more than either Fox or MSNBC.

Among ALL cable networks, CNN ranked #3 in total day and also weekday and M-Su prime time in total viewers this month. CNN continues to have the youngest audience in cable news in total day and prime and reaches the largest average monthly cumulative TV audience (among both total viewers and adults 25-54) of any cable news network 2020 to-date. Across platforms, CNN reaches more total people than any other cable news brand across TV and digital and more people ages 25-54 than any other news brand across TV and digital.

• On weekends, CNN ranked #1 on Saturdays, in the 12pm hour and every hour from 2-7pm, as well as every hour from 10pm-6am. On Sundays, the network was top-rated every hour from 1pm-5am.
• Smerconish (9am, Saturday) ranked #2 across cable news among both total viewers (1.052 million) and adults 25-54 (255k) growing +60% and +49% respectively.
• New Day Weekend with Christi Paul and Victor Blackwell ranked #2 in cable news in total viewers and in the demo adults 25-54 during its respective time periods this month, growing double digits vs. a year ago.

• CNN’s global Town Halls, Coronavirus: Facts and Fears, hosted by CNN’s Anderson Cooper and Dr. Sanjay Gupta, along with health experts, CNN correspondents from around the world and others, have become essential viewing on Thursday nights since the first one aired on March 5th. The Town Halls continue to have robust interest among viewers, averaging 1.373 million total viewers and 334k in the demo adults 25-54 over 13 episodes.
• On 5/31 CNN’s special I Can’t Breathe: Black Men Living and Dying in America anchored by Don Lemon ranked #1 in the demo adults 25-54 with 1.164 million. Earlier that morning, Jake Tapper hosted a special tribute We Remember: A National Memorial Honoring the Victims of Covid-19 to honor those lives lost to the coronavirus pandemic. On 5/15, CNN’s second edition of The Color of Covid hosted by Don Lemon and political commentator Van Jones ranked #2 in the demo adults 25-54 (345k), far ahead of MSNBC in the time period by +68%