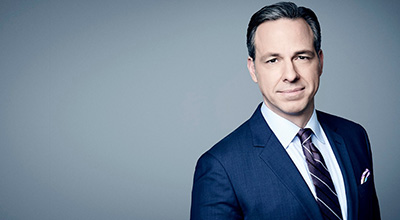 CNN finished May 2018 as the No. 8 cable network in total day viewers, and posted its second-best May in network history in that category. But the network lost a large chunk of its prime time audience relative to 2017, and prime time is the daypart TV news advertisers traditionally look at when determining their ad spend.

Despite less than spectacular prime time ratings in May – the network failed to capture 900,000 viewers in the daypart and finished third behind MSNBC and Fox – CNN still managed to beat rival MSNBC in the A25-54 demo across a variety of other dayparts: Total day, daytime and on weekends.

The numbers for May 2017 (Nielsen Live+Same Day Data):

The Lead with Jake Tapper (4 p.m.) had its second-most-watched May on record, and second-best-may on record among adults 25-54.

CNN’s most-watched show Anderson Cooper 360 (8 p.m.) also had its second-best May delivery on record in both total viewers and adults 25-54.

CNN Tonight with Don Lemon (10 p.m.) had its second-largest May audience on record in total viewers and adults 25-54.

On Saturdays, CNN Newsroom with Fredricka Whitfield/Ana Cabrera beat MSNBC and Fox News from 11 a.m. -6 p.m. and at 7 p.m. and outperformed MSNBC for 20 out of 24 hours among adults 25-54.

On Sundays, season 11 of Anthony Bourdain Parts Unknown averaged more than 1 million total viewers and 461,000 adults 25-54 across the four Sunday premiere episodes this season. The program ranks No. 1 in its time period in the key demo and easily outperformed Fox News and MSNBC by triple digits.

CNN HAS SECOND-BEST MAY EVER

CNN Beats MSNBC for 47th Straight Month in May

Despite tremendous audience levels for the firing of former FBI Director James Comey and the subsequent appointment of Robert Mueller as Special Counsel last May, CNN this year had its second-best May ever (after 2017) in total day among total viewers (657k) and the third-best among adults 25-54 (199k; after 2011 and 2017). The network had its second-best May dayside performance since 2003 among total viewers (701k) and third best in the demo 25-54 (191k). CNN’s morning program New Day and The Lead with Jake Tapper and the network’s weekday primetime programs (Erin Burnett Outfront, AC 360 at 8pm and CNN Tonight) all had their second-best May performance on record in both total viewers and adults 25-54 (after 2017).

CNN once again surpassed MSNBC in total day, daytime and on weekends this month among adults 25-54. In total day, CNN has now topped MSNBC for 47 straight months in the key demographic 25-54 (199k vs. 197k), the longest monthly streak since January 2010.

CNN Original Series continue to post strong ratings during the month of April:

• Anthony Bourdain Parts Unknown (Season 11) averaged 1.070 million total viewers and 461k among adults 25-54 across the four Sunday premiere episodes this season (4/29-5/20/18). The program ranks #1 in its time period in the key demo and easily outperformed Fox and MSNBC by triple digits among 25-54 (+117%; 213k and +184%; 162k respectively). The show ranks #1 in 25-54 and 18-34 in cable news within its time period across every episode season-to-date. So far in 2018, CNN’s Anthony Bourdain: Parts Unknown is ranking #2 among food and travel non-fiction series in All of Cable, attracting a larger, more affluent, educated, and diverse 25-54 audience to its premieres than similar series on Food Network and Travel Channel.

CNN Month of May Tracker by Year:

All of Cable:
Among ALL cable networks, CNN ranked #9 in total day in total viewer delivery, marking the fifth straight month that CNN is a Top 10 cable network.