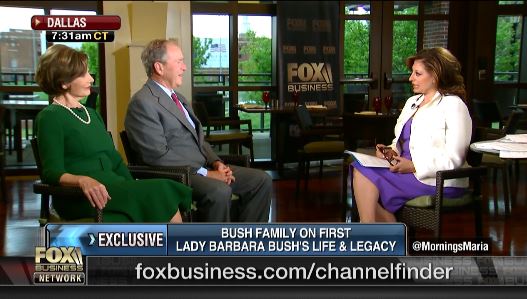 Maria Bartiromo is in Dallas today moderating a panel on women leaders as part of a forum at The Bush Institute at the George W. Bush Presidential Center.

She also secured an interview with former President Bush and First Lady Laura Bush for her FBN show, Mornings with Maria. The interview came about 12 hours after the news of the death of Bush’s mother, former First Lady Barbara Bush.

“I had a beautiful visit with her. When it looked like — well, yesterday morning, on the phone, and she didn’t say much, but I told her I loved her,” said Pres. Bush.

He said he last saw her a week ago Saturday. “She and I were needling each other and the doctor came in and she turned to the doctor and said, ‘you want to know why George W. is the way he is?’ And the doctor looked somewhat surprised. And she said, ‘because I drank and smoked when I was pregnant with him.'”

Among the participants in the 3-day forum in Dallas, Amazon founder Jeff Bezos and, a man Bush calls “my buddy,” U2 frontman Bono.

“I’ve made it a point not to second guess my successors,” Bush said when talking about the U.S. relationship with Vladimir Putin. “People used to tell me, ‘Putin’s popular. And I’d say, ‘I’d have been popular if I owned one of the big networks too.’ There’s no media pushback on Vladimir Putin. Not much competition. So he’s got pretty free reign, domestically.”