NEXT:Jim Acosta: 'We Are Not the Opposition Party, We Are Just Trying to Get at the Truth'
PREVIOUS:Russian Foreign Minister Rebukes Andrea Mitchell: 'Who Was Giving You Your Manners?' 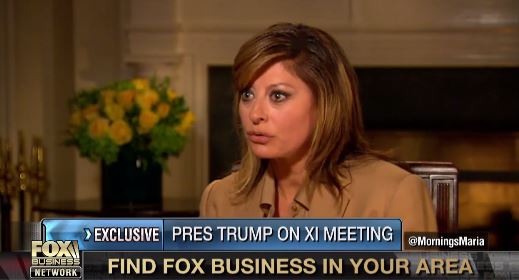 In her wide-ranging interview with Pres. Trump, FBN anchor Maria Bartiromo had to correct the president at one point when he was telling the story to his dinner guest, China’s president Xi Jinping, that the U.S. was in the process of hitting targets in Syria.

“I’ll tell you only because you’ve treated me so good for so long,” Trump said to Bartiromo as he told the story.

“So what happens is, I said, ‘We’ve just launched 59 missiles heading to Iraq…”

“Yes. Heading toward Syria,” Trump says, continuing with the story.

It should be noted that Fox chose not to edit out the gaffe, but kept it in, including Bartiromo’s correction.