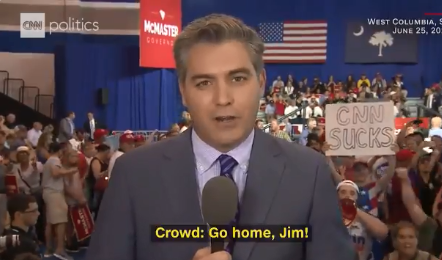 CNN’s Jim Acosta had a “surreal” experience covering a Trump rally yesterday in South Carolina, and he lived to tell the tale in an op-ed for CNN.com.

Approximately three hours before Trump took the stage in West Columbia, an elderly woman walked right up to me and ordered me to leave the venue. Her language would likely make her grandkids blush.

Acosta then writes that he tried to shake the woman’s hand, but she wasn’t having it, and when he did a live shot for The Situation Room in the 5 p.m. hour, the crowd seemingly picked up where the woman left off, chanting “Go home Jim!”

But not everyone was so hostile. In fact, many just wanted Acosta’s attention. After all, he’s someone they see on TV everyday. For instance, Acosta writes, “a steady stream of Trump supporters approached me for either autographs on their McMaster signs (sorry, governor) or photos which I am sure they shared on social media.”

“One of the young men in the crowd was shouting “go home,” Acosta continued. “A bearded fellow who called himself Patrick asked if I could somehow put him on television.”

The two went on to talk for a good 10 minutes.

A reporter from a local news station even quipped, “I’d say you’ve won over half the crowd.”

Acosta was seemingly able to change at least one mind yesterday, per the tweet below:

A moment of civility: As POTUS is delayed due to weather, @CNN’ s @Acosta gave up his chair to an elderly Trump supporter. She was so appreciative that she wanted her photo taken with him. Her son said to Jim, “You’re a good man. Your mama raised you right.” #SCGov pic.twitter.com/0vXaCgjugE

Fact check: My mom did raise me right. Happy to lend a hand. https://t.co/OiOlLtkrSN

Then, there was Fox Business anchor Trish Regan coming to the defense of Acosta on her program, The Intelligence Report this afternoon.

“CNN’s White House correspondent Jim Acosta being heckled at Trump rally in South Carolina last night … you heard the crowd chanting ‘go home Jim’—not right, not right. They may disagree with some of Acosta’s reporting but you know Jim Acosta is just doing his job. He’s out there reporting on the rally, and not only is it bad manners, it’s bad form to attack him. I say this because I’m very concerned about the state in which we now live. Where there is a complete, total, lack of civility and I’d say it goes for both sides right now. I mean you have White House Press Secretary Sarah Huckabee Sanders just trying to enjoy a meal out at a restaurant and she was asked to leave because she works for the president. And it didn’t stop there. Here’s Governor Huckabee telling me what happened. Again, this is not right. Jim Acosta shouldn’t be heckled; Sarah Huckabee Sanders should not be heckled. We’re better than that, at least I hope we are. Meanwhile you got a DHS employee who got a burned animal carcass deposited on the employee’s doorstep, how that one. Or Kirstjen Nielsen being shouted at by a mob at a Mexican restaurant. Protesters gathering outside of Stephen Miller’s D.C. apartment and just last week a congressional intern shouting ‘F you’ at President Trump and get this—she gets to keep her job there with Maggie Hassan from my home state of New Hampshire. I would have fired her because that kind of language is never appropriate, it’s never right. What has happened to us? Who are we right now? I mean this is not the America I know and love, we have always had a certain kind of respect for the other sides’ opinion. That does not exist right now, and that’s very dangerous.” 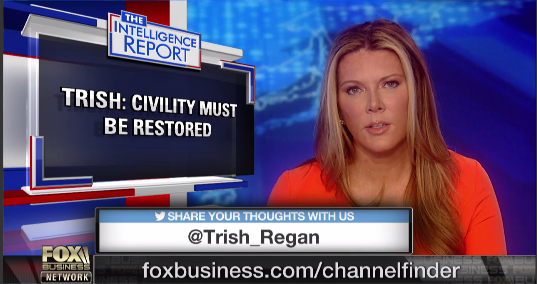