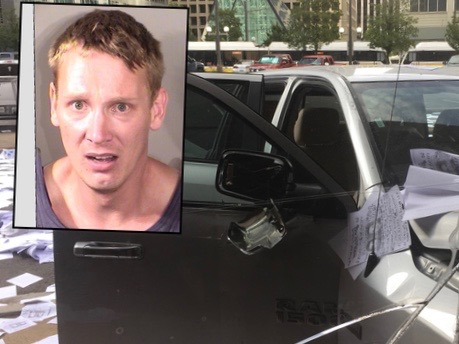 KDFW, the Dallas Fox 4 station, is recovering today after a man with a lengthy criminal record crashed his truck into the building several times yesterday morning.

Management has brought in counselors for anyone in need of additional support today, according to our sister site TVSpy.

Reporters across the market ran to the station after Michael Fry crashed his truck into a side wall of the Dallas Fox station multiple times just after 6 a.m. yesterday morning. He then got out of the car, began ranting and throwing papers.

“When he was in the bed of the truck he was yelling out ‘High treason! High treason!’ As he got over to the window he was trying to explain something that involved the Denton County Sheriff’s Department,” said Fox 4 reporter Brandon Todd, reporting for the station yesterday morning. “He is claiming that someone tried to kill him and ended up hitting a relative of his and so he was wanting justice. But also at some point he was saying, ‘And they’re coming for me. They’re coming after me trying to kill me.’”

“According to police, Fry was upset about a deputy-involved shooting in 2012,” Dallas NBC station KXAS reported during its 11:30 a.m. newscast yesterday.

Though authorities do not believe Fry—whom they has a lengthy criminal record—was targeting the media, KTVT anchor-reporter Dan Taggerty told TVSpy that security is a constant question in his newsroom and across the Dallas market.

“I was shocked, but not afraid. Fox 4 did a fantastic job covering the chaos and uncertainty, and their composure gave me comfort that they were safe. Security is an ongoing discussion in today’s newsrooms. It’s something that my station, CBS 11, takes very seriously. We have regular briefings about building security and employee safety. And I hear the same from friends at other stations in Dallas.”

Fox 4 captured the moment Fry ran into the building, in this video: