When NBC News announced on Monday that NBC Nightly News anchor Lester Holt would be sitting down with Pres. Donald Trump on Thursday for an interview, many assumed their conversation would focus on health care or tax reform, but it got a whole lot more interesting in the last 18 hours.

Holt’s interview will be Trump’s first since making the decision to fire FBI Director James Comey. And it could go down as the president’s most significant interview since taking office in January. We’re hearing that no requests have been made by the White House. The interview is still scheduled to take place tomorrow afternoon, and will air during the Thursday edition NBC Nightly News. But NBC will quickly turn around the newsiest portions on MSNBC and on digital. There is also some thought being given to livestreaming it.

MSNBC has been promoting Holt’s interview all day with a graphic in the lower-right corner of the screen. 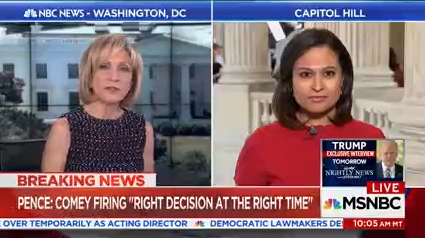 This is Holt’s first interview with Pres. Trump. Holt’s Nightly News is currently the top evening newscast of the current broadcast season among adults 25-54, the demographic coveted by the ad community.

During an Oval Office meeting with former Secretary of State Henry Kissinger this morning, Trump was asked why he fired Comey. “Because he wasn’t doing a good job, very simply, he was not doing a good job,” Trump said. CBS News’ Margaret Brennan followed up asking if the firing affected Trump’s other Oval Office meeting this morning with Russia’s foreign secretary. “Not at all,” Trump said.